A generation at risk 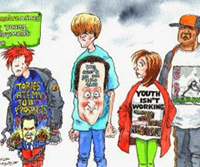 The philosopher Daniel Innerarity says in ‘Vivir para Pensar. Ensayos en homenaje a Manuel Cruz’ (2012) (‘Living to think. Essays in homage to Manuel Cruz’) that the most complex problems are not structured at all. A certain problem we are occupied with hides another that is very different. Very often we have solutions for non-existent problems, while nobody has illuminated the new problems with the necessary light to proceed with for its adequate solution. These are the so called ‘Wicked problems’, about which we don’t have the solution, and we are not even very sure about what the problem is. What we do know about these problems is that we need creativity to discover the ‘real’ problem, and this always implies a certain sabotage of the fragmentation of knowledge and the specialization, against the exactitude of the usual solutions, because it means a strong disposition to learn from outside of established knowledge and practices. In short, it means to assume a risk, the risk of creativity.

When I think about the persistent problem of young unemployment, I see it as one of these problems. The data leaves us devastated and dealing directly with young people affect us and makes us think that we need to focus on this question in a different way. The last ILO’s Global Employment Trends for Youth 2013 report warns of the risk for a whole generation: 73.4 million young people between 15 and 24 years old are unemployed. From 2007 the figure has grown by 3.5 million; 2 million in advanced economies. In Europe there are almost 6 million unemployed youths and Spain is contributing the most to this figure, with almost 3 millions. If we add to this the 45 million young people that each year knock on the door of the job market, and it is clear that we face a grave global challenge.

Although there are great differences among countries, young people, in general, are almost three times more likely to be unemployed than adults. If we delve into to our most immediate reality, in a small region like Euskadi, we find this very situation, the same incapacity. The 52,400 young people (up to the age of 34) who are demanding employment (Lanbide, August 2013) represent 30% of the total of job seekers. When analysing the realities of other countries, we must make note that in Germany, Austria or Switzerland and Nordic countries this problem is practically non-existent. For a time they have been developing a culture in their societies that makes them assess and value the necessity to educate and integrate young people, designing social and institutional regulations that allow their young people to address the job world with guarantees and security, and with less fracturing and drama.

I think the key to the real problem of young unemployment is here, to see it just as an effect of the economic and financial crisis, and not as a grave inefficiency of the economic-social system, and that corresponds to another way of conceptualising the economy and its organizations, in particular, businesses. Without open and competitive businesses, that require the competencies of people, there are no jobs. But those companies would not exist if they did not get involved in a society with a value system that provides sustainable support the permanent innovative capacity of people and companies, says Santiago García Echevarría, Professor of Economics of the University of Alcalá. At the Icaro Think Tank we think that social innovation means a change in the relationships among people and among groups in three dimensions (cooperation, participation and integration of economic values in the social values) and that there will not be any human problems whose solution doesn’t require technological and economic innovation. What we need to look for is a good combination of the three types of innovation and avoid excessive competition among them.

A society that pretends to be really advanced has to guarantee that people, especially young people, can acquire the competencies that will prepare them for a dignified job, so they are able to properly and fully participate in society. We cannot leave this question to the functioning of the market, and much less abandon them to their luck. Behind the migration of young people is the lack of jobs problem, although sometimes we try to raise it as an advanced solution. But, is it really so? Or, is it more about our slovenliness by getting rid of the problem and our inability to manage it? Let´s go into depth about this problem, which belongs to everybody. If the real problem is that we have not defined the problem well, then let´s do so. Let´s not miss the opportunity, if we really want the people that want to, to have the ability to live and work in their countries of origin with dignity. A generation is at risk.

At the Fundación Novia Salcedo we work with other networks so that, together, we are able to promote, alongside the most important international bodies (ILO, UNESCO, EU), the decade from 2017-2026 as one being in favour of youth employment across the world and that lets us, from Bilbao, be at the forefront of avant-garde thinking and experimentation in this field, because we are committed to finding solutions to this problem.

An article by Begoña Etxebarria Madariaga, director of the Fundación Novia Salcedo and member of its Ícaro Think Tank, published in the newspaper ‘El Correo’ on 4th October 2013

This site uses Akismet to reduce spam. Learn how your comment data is processed.