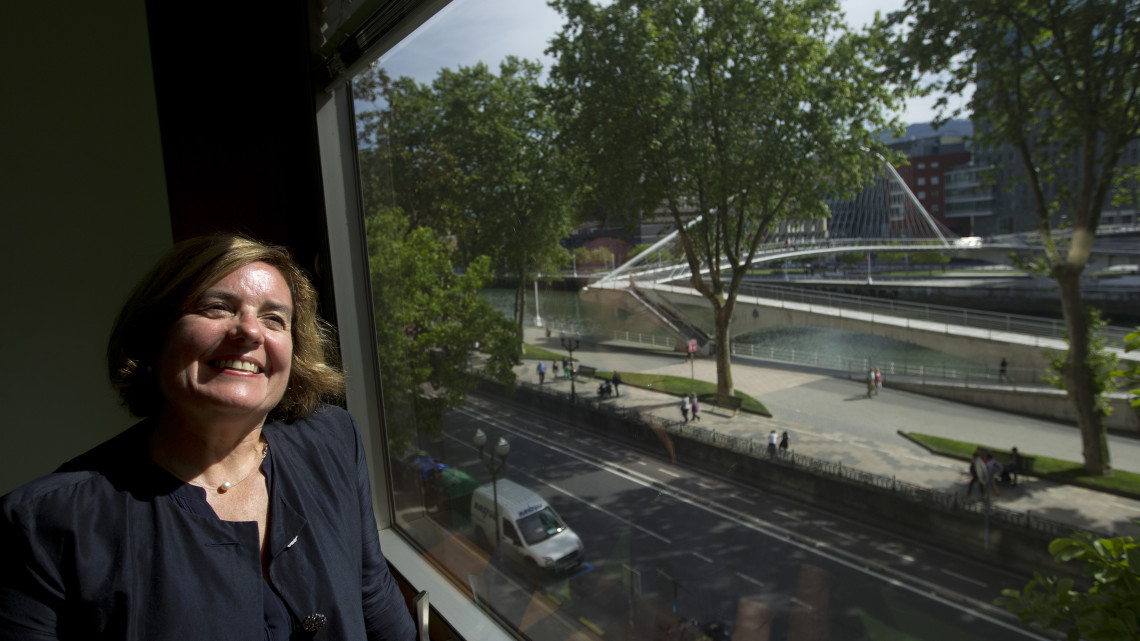 The general director of the Novia Salcedo Foundation has embarked, together with his entire team, on an ambitious campaign: to convince the United Nations to declare the period between 2019 and 2028 the Youth Employment Decade. With over three decades of experience in this field, Begoña Etxebarria explains how this project came about and her expectations. She is also encouraged by the support they are receiving from public institutions. “This is the first time that governments are beginning to realize that the growth model that we have is not enough and they are aware of the limitations they have”, she says.

What are the reasons that have led the Novia Salcedo Foundation to create a project such as Pegasus?
Pegasus is a project based on youth employment, which, for us, is a core value for sustainable socio-economic development. Employment is not a resultant but a factor of development based on the dignity of human beings. It is very difficult for a young person to undertake any life project without a job. We realised that there have been and still are many declarations for international years and decades but that there was no initiative, either from civil society or from specialised agencies, for one regarding this issue. So we saw the opportunity to attract attention to an issue that concerns us all and for which there is widespread international sensitivity and to say: not only are we affecting the lives of all these young people (75 million worldwide), we are affecting the development of the countries in which they live.
In addition, we had a very close example. Juan Luis Laskurain, the president of the World Rural Forum, which is a small civil organisation with headquarters in Vitoria, had travelled a similar path. They managed to convince the General Assembly of the United Nations, in 2012, to declare this year the International Year of Family Farming. He is a member of our board of trustees and when we were faced with the question of what more we could do to solve this crisis in which youth employment is not improving, he said that no matter how well we perform each day, a time comes when we have to reflect on the causes of the problem. Then this initiative to promote a decade of youth employment arose and our professional team quickly got to work.

Why now?
On the one hand, because of the dimension of the problem and, on the other hand, because we needed, as an organisation, to take a step forward in the current economic situation. Four years ago we created the Ícaro Think Tank, a way of reflecting on the underlying causes. The idea was to obtain more in-depth knowledge, write about it, tell it and launch this campaign. Another key aspect is that, in a global environment, any action taken must be local but also global. So we need a worldwide campaign because the problem is also a worldwide problem: there are 75 million unemployed young people aged 18 to 25 according to ILO data.

What does the NSF want to achieve with the proclamation of the Youth Employment Decade?
The first thing is this long-term vision because we want young people to be the driving force of development in their countries as they are a force that, if well channelled, will contribute to this development. On the other hand, we want the commitment of the international community so that youth employment can become part of the Human Development Agenda. Work is a means of being within the system, not excluded from it. The campaign is a tool to draw attention and put together an agenda with content. In this sense, the UNESCO launched the Decade of Education for Sustainable Development and now nobody calls into question that sustainable development is a concept that is valid for all countries, and the same was the case with the Water for Life Decade.
With this Youth Employment Decade, we believe we have to create a space for dialogue, participation, and understanding of the problem, to define priorities and lines of action. The contents are given by the G-20, the OECD, ILO, EU; we know what needs to be done. So, why isn’t it being done? I think that is where we are clearly caught up in the short term due to the economic deficit.

What support do you have from domestic and international institutions?
In these eight months since we launched the project we have embarked on an impressive contact agenda. In the years that I’ve been working at this, I have never, until now, seen so much concern among public institutions and governments. This is the first time that they are beginning to realize that the growth model we have is not big enough for everyone and that we need an in-depth revision of the role of the economy; we are convinced it should be an instrument that encourages inclusive societies. We have spoken with the European Commissioner for Employment, László Andor, with Joaquin Almunia, with the director-general of the ILO, Guy Ryder, with the president of the European Parliament, Martin Schulz, with Angel Gurría of the OECD, with the Minister of Work of the Basque Government, Juan Maria Aburto, who is very interested… I believe that all the governments are aware of their limitations. The positive element is that there is lots of room for cooperation.
At the NSF we have set up an advisory committee comprising 15 Spanish organizations that are present through their networks: The Santa María la Real Foundation, Aranzabal Foundation, Tomillo Foundation, Vicinay Cadenas, the Basque Government, the Andalusian School of Social Economy, UNESCO Etxea, the Teresiana Foundation, the Prince of Girona Foundation, the Latin American Youth Office (Oficina Iberoamericana de Juventud)… We have lots of support and bit-by-bit we are building our network. To make this possible we have a group of member States that are the key in order to submit this project to the United Nations for consideration in the autumn of 2016. The Spanish Government has displayed a lot of interest and has confirmed its support but we do not yet have an official endorsement and we are working to achieve this. Spain is an ideal option to lead this movement right now as we have this problem on a very larger scale.

How is that support materialised?
As it is a very ambitious and long-term project, we need to identify the needs, what each party can contribute and this involves both money and non-money resources, such as knowledge, infrastructure… As soon as the Spanish Government gives us its answer, we shall have the government’s entire foreign office network at our service to achieve our goal, just as the Basque Government has already done, which was of tremendous value. We have also benefited tremendously from the support of university professors who are working with us, such as Sabino Ayestarán or Santiago Garcia Echevarria or Victoria Camps, who helped us extensively in the first year with the Ícaro Think Tank.

What do you think is happening in the Basque Country to warrant a 37% unemployment rate among young people?
The Basque Country is no exception with regard to all the factors that the ILO repeats over and over again about the barriers that countries and regions that suffer from high youth unemployment have to overcome. There is an objective problem, which is the low job creation capacity of the economy, but there is also an enormous deficit in the connection between the academic world and the productive world, young people lack practical experience, there is a gap that must be filled. Studies should be more fluid, less jumpy. In other countries the productive world never lags behind the academic world, it is the other way around. This is where we need to consider the training role of companies.
There is another problem regarding the lack of intermediation services, which, in our country, have focused on managing unemployment rather than employment. We have a tremendous task regarding organizational innovation ahead of us. And there is also a lack of access, networks and contacts needed to involve all citizens and society because this is a problem that affects us all. We need to respond of a more collective manner.