Youth employment: The engine for a bright future 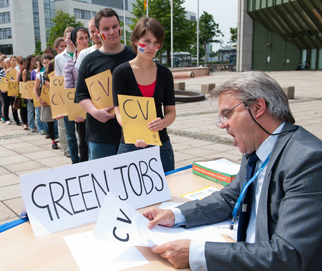 This statement is the key for the immediate future: a youth generation must be saved. Youth unemployment in countries such as Greece and Spain exceeds 50% and the average of the EU is about 22%. It is high time to react, we are in time yet. All these issues have been held in an interesting discussion in ‘The Stream’ a programme broadcast in Al-Jazeera.

20% percent of young Europeans are looking for a job without any success. The fear of youth unemployment has been spread among European youth. Not allowing the entrance of young people into the labour market means less potential for the economy and a dramatic loss for society. László Andor, the European Commissioner for Employment, claims that some Southern European countries based their economies on tourism and property. As a result, a part of the youngest social stratum was attracted by the high wages in these sectors and specialized in a particular skill. This has become in an uphill struggle for them because of the current global crisis. A part of this generation lacks language skills and a disposition to be mobile within the European borders. In Andor´s opinion, youth unemployment is a combination of these two factors: the economic design of the Mediterranean countries and the lack of adaptation of a certain section of young people.

On the other hand, the economist Jacob Kirkegaard from Peterson Institute declares that an economic recovery is in urgent need. First of all, we have to take over this deep macroeconomic recession. One key to success in the area of unemployment among the young is to invest a huge amount of money into education and platforms to encourage access to the labour market. Kirkegaard suggests that some institutions should be renewed and the legislation should also be modified to encourage contracting the young.

Young people themselves have things to say. Pablo from Spain remarks that there are few investments to support work creation projects. On the other hand, Thomas, a Belgian entrepreneur aged 22, says that his company is struggling to push innovation. Furthermore, Giannis a 24-year-old Greek, asserts that nepotism is the main problem of these Southern European countries. Last but not least, Peter Matjašič presents the youth guarantee as a useful solution to fight our unemployment. It does not consist of getting a job automatically; Peter says “This programme is for those who exit the education process and before entering the labour market are left behind, is a period (under 25 year old) to develop skills through a grant, a training in a company or a course”. The youth guarantee could make a vast profit in the long turn.

In my opinion, the youth guarantee enables a myriad of good work innovation initiatives. Nevertheless, the budget assigned for this youth employment platform is 6,000 million euro´s: clearly insufficient. Peter Hartz –the father of the minijobs- asserts that more than 300.000 million euro´s are need for create and ensure the employment among the youth. Therefore we could claim that the youth guarantee represents a temporary lifeline. The European and worldwide institutions should bet on the future showing an unconditional support to the youth employment.