Experts discuss the present and future of entrepreneurship 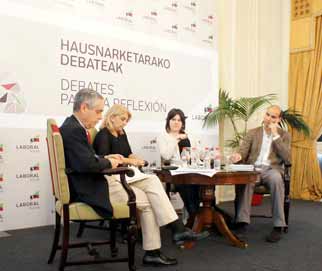 In the current situation, when jobs are few and far between, many young people see the option of opening their own company as a ray of hope for their future. In addition, we must not overlook the fact that the greater the number of companies, the greater the likelihood of an increase in new jobs. However, entrepreneurship seems to be losing some of its steam in the Basque Country among young people. In its latest report on ‘Youth Entrepreneurship in the Basque Country’, the Basque Youth Observatory stated that only 8 % of young people aged 20 to 34 had entrepreneurial experience in 2013 compared to 12.1 % in 2010. Apparently, despondency sets in when people perceive the difficulty in obtaining funding, financial aid for entrepreneurs, fiscal measures, etc.

However, the improvement in the economy, however slight, could help reverse this trend, as can be inferred from the data of the Gaztenpresa Foundation for the first four months of the year. This organization, which belongs to Laboral Kutxa, provides entrepreneurs with assistance and has been involved in the creation of 146 enterprises, 87 more than in the same period in 2013. In terms of direct employment, Gaztenpresa’s activities have resulted in 263 people joining the labour market in the Basque Country and Navarre.

Precisely Laboral Kutxa, with the support of UNESCO Etxea and NegoBide Círculo Empresarial, organised a Discussion and Reflection Forum focused on youth and entrepreneurship at the Carlton Hotel on 5 June. The session was opened by the regional director of Laboral Kutxa, Peio Ugalde, and presented by the director of External Relations, José Ramón Taranco. The moderator, the journalist from Deia, Leire Uria, provided data on the discussion topic before giving the floor to the three experts present: Luis Cañada, president of the Novia Salcedo Foundation; Inmaculada Ramos, director of the Gaztempresa Foundation; and Ander Izquierdo, team coach from Bilbao Berrikuntza Factoria (Mondragon Unibertsitatea). The subject matter covered by these experts focused on theoretical and practical training, technical and financial support for projects and their connection with the market.

Furthermore, the Spanish Confederation of Associations of Young Entrepreneurs presented Guía2 (Guided) in early June, which is a website dedicated to labour and entrepreneurial guidance that seeks to encourage young Spaniards under the age of 35 who are working abroad to return to Spain. This portal, co-financed by the Youth Programme 2013 of the Directorate General of Emigration of the Ministry of Employment and Social Security, offers advice, best practices, courses, degrees, the opportunity to participate in a blog for entrepreneurs and contact other young entrepreneurs. In addition, it lists other websites of interest related to employment.