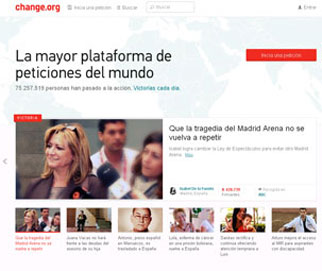 Change.org is a digital platform dedicated to changing society. Founded by Ben Rattray a few years ago, it was driven by the abuse his brother suffered when he confessed his homosexuality. Rattway -considered one of the 100 most influential people in the world- understands that “there is strength in unity” and advocates a change in society triggered by society as a whole.

The truth is that this tool has changed the world. Can you imagine a similar initiative during the tragic week of Barcelona in 1909? Probably, by means of a simple signature the aggrieved would have been able to avoid all the turmoil that, as a result of social tensions, occurred in that week. The digital petition platform has far exceeded any forecasts as can be seen regarding the events of 15th May, Molly Katchpole against Bank of America, the petition of Arab women for the Saudi government to allow them to drive… a wide range of initiatives that have attracted millions of people around the world.

But what is the use of a petition on change.org? According to its founder and in the particular case of Spain “we are not a platform dedicated to collecting signatures supported by an ID Document, as might be the case in a Popular Legislative Initiative (PFI). We enable a person to generate public and media pressure on an institution, a government or a company. The validity of our model can be seen in the fact that we are continuously witnessing specific victories that go to show that public and media pressure is effective when it comes to achieving change. The classic collection of signatures for a PFI in Spain, for example, has not led to a single permanent legislative amendment”.

With just 150 employees worldwide, the platform receives 15,000 petitions per month, most of them from civil society since government organizations have cornered all means of action, and, therefore, it is only possible to accelerate certain changes through this type of tool. One of those changes is undoubtedly the one that this Foundation wants to implement.

The Declaration of the Youth Employment Decade 2019-2028 by the United Nations needs to be supported by the goodwill of all the members of this society that seems to have lost its identity as a community. Our young people are in a situation of national emergency and the greater the number of signatures we can attract at change.org, greater priority will be given to our initiative, which will also lead to greater social support. With this end in view, we are planning to collect over 100,000 signatures that will allow us to acquire that relevant social force to ‘go before’ the United Nations.

Without the support of civil society, nothing would be possible. We need a little additional effort. The goal deserves it.