Young people become the driving force behind the African economy

A ‘time bomb’ is how Zambia‘s minister of finance, Chikwanda Alexander, described the problem of youth unemployment in Africa at a conference; a continent where almost half of the young men and women do not have jobs or have to eke out a living in the informal economy. Chikwanda drew attention to the enormous challenge faced by countries in the region, where 60% of the unemployed are young people, a figure that has profound impact on social cohesion and political stability.
The ‘African Youth Decade’ will end in 2018. This is an initiative that African leaders ratified in 2009 in Addis Ababa (Ethiopia) to mobilize resources for the development of 200 million people aged 15 to 24 living on the continent. Over the last six years, African governments have made some efforts to make words and actions go hand-in-hand by creating institutions to encourage youth employment, strengthen vocational training or by calling contests that reward business plans.
The result has been a handful of projects led by young people who are desperately seeking a place in their respective sectors as well as the sufficient stability so as not to succumb to economic crises, and also business initiatives with high social impact.

The business of life
Alain Nteff‘s life changed in 2012 when he decided to accompany a friend, a medical student, during some practical training at a hospital in a rural area of Cameroon. During his stay, 17 babies died due to complications from diseases such as syphilis, malaria or chlamydia. Nteff was faced with a harsh reality that translated into staggering data. More than 7,000 Cameroonians die each year from pregnancy-related complications and 4,000 babies die of diseases for which vaccines exist. A year on and this 23 year old engineering student launched GiftedMom, a platform where pregnant women in remote areas of the country can have access to medical advice. 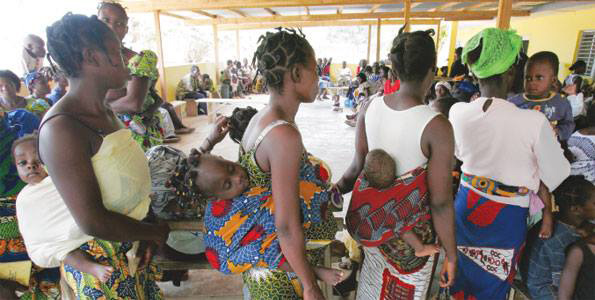 GiftedMom works as a SMS service through which users can receive all the information they need. “We realized that there was a need to create a low-cost channel to tell women when they had to attend the antenatal care centre and when to take their babies to be vaccinated”,  according to this young man, who has just won a Mastercard Foundation award for his contribution to youth employment in Africa, in a recent CNN interview.
The service, which began with eight users, currently has more than 3,000 registered users (including mothers and infants) in 18 areas of Cameroon, and 200 medical students and health workers who provide counselling via SMS. There is a subscription fee that is paid only once, and it costs less than a dollar, but all subsequent messages that include alerts to go to prenatal checkups and vaccinations are free. In addition, in order to provide for Cameroonian women who do not know how to read and write (17% of the country’s women are illiterate), the GiftedMom team is also developing voice technology in the country’s four traditional languages.
According to Nteff, another of the keys to reducing the mortality among women due to causes arising from pregnancy lies in sex education, in the prevention of unwanted pregnancies. Consequently, GiftedMom organises SMS based awareness campaigns and workshops on contraception methods and techniques for families and young people throughout the country.

The passion for passion fruit 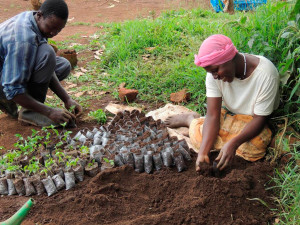 Oval-shaped, waxy and yellow. That’s passion fruit, the fruit that is enabling Kyenjojo women (western Uganda) to become entrepreneurs. Passion fruit is becoming a driving force in the region where KadAfrica is based. This is a company founded by Eric Kaduru, a young man aged 30 who left his job in the field of marketing and advertising to launch this project that has enabled 962 young Ugandan women to have access to a plot of land dedicated to the cultivation of maracuya (passion fruit).

KadAfrica provides young women with a 240 square metre plot, 45 seedlings, supplies and farming advice so that they can produce between 220 and 330 pounds of passion fruit per month, a product widely consumed in Uganda but that has to be imported from other countries. With this initiative, Kaduru aims not only to ensure these girls have a monthly income, but also to transform their plots into small scale farms so that the profits can have an impact on their communities. The women have built a crèche for Kyenjojo children and some have extended their plots. 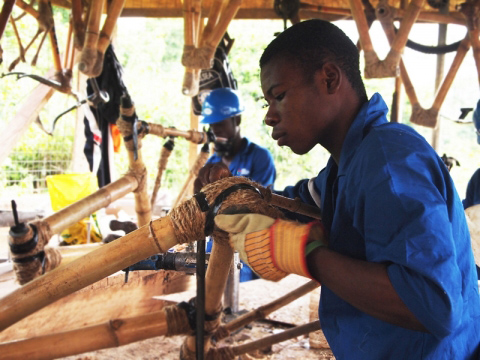 or poor children in rural areas of Ghana. Danso was able to go to school and then to university. His grandfather, who immigrated to the UK to work, made this possible, enabling Danso to become a psychologist and to lead one of the most interesting and hopeful business projects in Ghana, the bamboo bicycle.
Everything goes back to 2010 when Danso convinced the creator of the bamboo bicycle, Craig Calfee, to cede its design to produce it in Ghana. The result from this agreement is Boomers International, a company that contributes to clean transport, provides young people with jobs, mitigates climate change problems and helps alleviate poverty in rural communities.
In addition to mountain, city and road bikes, Boomers produces frames and accessories and has become a benchmark in African social economy. The company also offers a guided tour through some of the most emblematic landscapes in Ghana, riding one of their bicycles that travellers can then keep.