The Campaign closed 2016 with significant progress in the international arena

To the official presentation in various forums in New York, Geneva, and Bogotá, we must add the creation of the Regional Committee for Latin America and the Caribbean

The year began with the presentation, on February 2, of the Campaign for the Proclamation of a Youth Employment Decade by the Government of Spain at the Youth Forum that the United Nations Economic and Social Council (ECOSOC) held in New York. The presentation of Pegasus to this body was accompanied by a side event organised by the Novia Salcedo Foundation with the participation and collaboration of the UN Global Compact, Injuve, ILO and the OIJ, among other organisations. In April, Novia Salcedo was also granted, by ECOSOC, ‘special consultative status’, which comes with a number of privileges and obligations within this supranational institution.

Another important milestone of the project was the presentation of the ‘Bilbao Declaration’ in the Basque and Spanish Parliaments to enlist their support. This document, approved during the 2015 ‘Bilbao Youth Forum’, includes a series of principles aimed at promoting and encouraging actions that favour the implementation of the Sustainable Development Goals regarding decent jobs.

Once again, at an international level, INJUVE participated in June in the Youth Employment Summit at the 105th Session of the International Labour Conference held in Geneva. During that same month, the initiative received the support of King Philip VI at the ‘7th Edition of the Awards for Excellence in the Professional Integration of Youth’. In addition, the monarch took the opportunity to highlight the ILO’s ‘Global Initiative on Decent Jobs for Youth’. At the same event, Max Trejo, secretary general of the Latin American Youth Organisation, expressed his full support for the Campaign and his willingness to work to include it in the summit this organisation held in Cartagena de Indias in October. On 21 July, the second meeting of the Campaign Committee was held in Madrid.

Beyond our frontiers, the European and African committees were joined by the Regional Committee for Latin America and the Caribbean, which is coordinated by the Chilean organisation ‘Tu primera pega’. The First Youth Employment Summit in Yaoundé, Cameroon, on 21 and 22 October was also used to present the campaign in Africa. This summit was organised by Ngwa Wilson Forbi, coordinator of the African Regional Committee and a member of ‘Integrated Youth Volunteer Organization’. Previously, the National Committee of the Democratic Republic of the Congo had been established.

On the other side of the Atlantic, the Novia Salcedo Foundation presented the Campaign on 25 October in Bogotá within the First Entrepreneurship and Democracy for Youth Summit, organised by young Latin Americans. Four days later, the 25th Latin American Summit ended in Cartagena de Indias with the signing of a ‘Youth Pact’ that should translate into the implementation of specific actions in each one of the countries in the region to do away with the barriers that prevent many young people from accessing education and jobs.

To end the year, the third edition of the Bilbao Youth Employment Forum organised by Novia Salcedo was held. Representatives of various national and international organisations shared their experiences and points of view with the purpose of establishing common methods that will help to develop and build organisations committed to the 2030 Agenda goals, especially Goal 8. In this sense, the director of the International Labour Organisation, Joaquin Nieto, explained the content of the ‘Global Initiative on Decent Jobs for Youth’, a project that aims to create a global partnership to improve the economic prospects of young people when they join the labour market.

The year ended with the 579 organisations from 86 countries pledging their support to the Campaign in favour of a Youth Employment Decade.

The steady growth of the Pegasus Project is the result of the hard work performed since 2013 by a team of six people, with the timely support of other members of the Novia Salcedo Foundation. In July of that year, this organisation began to discuss how it could intervene to mitigate the scourge of youth unemployment, which affects 75 million young people around the world. “We thought that the solution to the major problems of world society required big achievable dreams”, they explain at the NSF.

This ambitious premise led to the decision to place its 33 years of experience in this field at the service of a new challenge, the launching of an international campaign whose ultimate goal was to place youth employment in the Global Agenda of Human Development, through the Proclamation by the General Assembly of the United Nations of a Youth Employment Decade, as a tool to deploy, implement and achieve Goal No. 8 ‘Decent Work and Economic Growth’ of that Agenda. “In our view, this was a historic opportunity to place our country at the forefront of the international discussions on this issue and also an opportunity closely linked to the future of new generations, which materialized in the creation of an Office in Support of the International Youth Employment Decade, with headquarters in Spain”, they stressed.

The first year of the project, named Pegasus, focused on announcing the campaign to the main stakeholders, and on studying the need for the implementation of an initiative of this type as well as a roadmap regarding contacts with international organisations (ILO, UNESCO, OECD, OIJ, WORLD BANK, IDB, OAS), the President of the European Parliament, European commissioners on Employment and Competitiveness, third sector organisations, youth organisations, companies, trade unions, political parties, universities, representatives of more than 20 Governments, the Basque Government, Ministry of Employment, Ministry of Foreign Affairs and the Ministry of Social Affairs (INJUVE), more than 90 organisations, companies… In short, to obtain the necessary social and political support to implement the machinery required for the success of an international public-private cooperation initiative on this scale.

Once the foundations were in place, 2015 was key as the Government of Spain assumed the governmental leadership of the project by setting up a Campaign Committee at a Cabinet Meeting on 12 June. This committee held its first meeting in Madrid on 28 July at the headquarters of the Youth Institute, which has played a fundamental role under the chairmanship of the Secretary of State for Employment and the Secretary of State for Social Services and Equality. 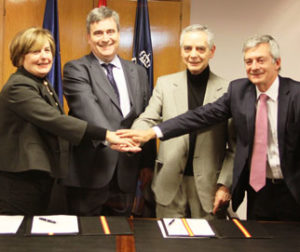 We also received the support of the Basque Government for the Campaign that year, and travelled to New York to attend the ECOSOC Youth Forum. A delegation also met with Ahmad Alhendawi, the UN Secretary-General’s Special Envoy on Youth. The American metropolis was also the scene of other events involving the Youth Employment Decade. In September, during the Sustainable Development Goals summit, several meetings with a number of agents involved took place to specify the Campaign’s Strategic Plan. Subsequently, we attended the presentation of the Global Employment Trends for Youth 2015 report, prepared by the ILO. The setting up of the African Committee, a continent that is providing extraordinary support to this initiative, and the second edition of the Bilbao Youth Employment Decade were other milestones of 2015.