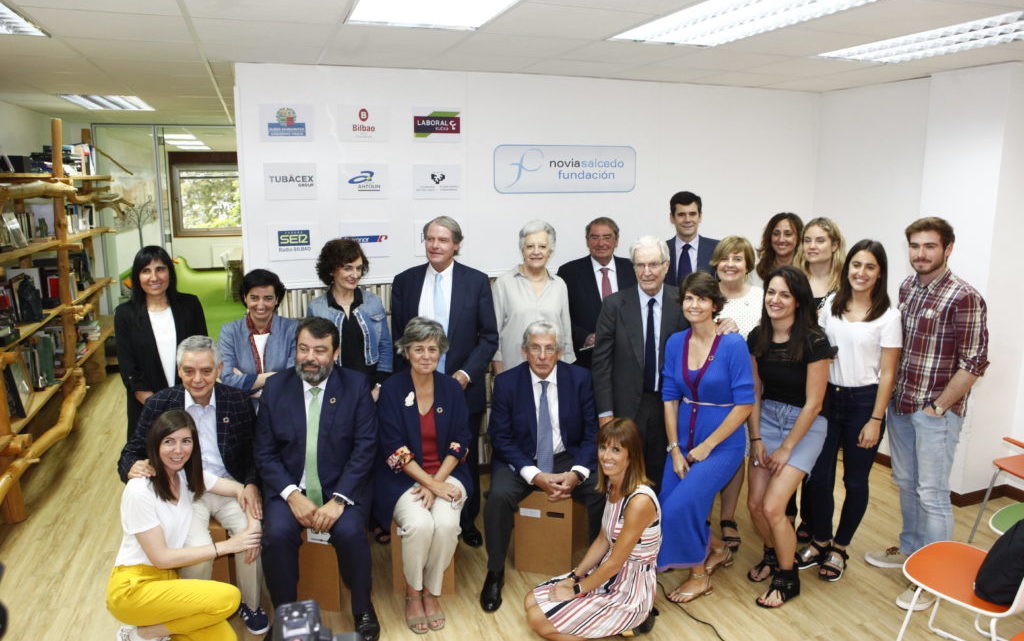 The Jury of the International Novia Salcedo Foundation Awards for the promotion of youth employment, chaired by the prestigious lawyer Antonio Garrigues Walker, and which will be presented  by the king and the Lehendakari at an official event in October, announced, at the Foundation’s headquarters in Bilbao, that the winners, in the various categories, of the eighth edition, held in 2018, are Sabino Ayestarán, in the Ad Honorem category, Diego Echegoyen in the Youth category, George Belinga (Individuals), Egile (Large Enterprises), Tuprimerapega (SMEs), and Braval (Institutions).

The International Novia Salcedo Awards, which strengthened the jury on this occasion to assess the nominations by incorporating entrepreneurs of the stature of Sanz-Magallón, Ormazabal and Videgain or personalities, such as Victoria Camps, are unique in this category in the country. These awards aim to recognize the excellent work done by individuals, companies and institutions toward integrating young people into the job market in optimal conditions, as well as those who generate innovative ideas or projects and plans that can be of assistance to young people.

In this edition, the jury has decided to create a new category titled ‘Outstanding Young Entrepreneur’, and to ensure that all the awards are linked to actions that promote the 2030 Agenda sustainable development goals (SDGs) approved by the UN General Assembly. Novia Salcedo has been aware of this Agenda since its origins and is committed to achieving its goals, given our special consultative status in the United Nations Economic and Social Council and as an associated entity of this organisation’s Department of Public Information.

A unanimous decision was made to grant the “Ad Honorem” award to Mr Sabino Ayestarán, Emeritus Professor of Social Psychology of the UPV/EHU, for his extensive knowledge regarding the transformation of organisations that learn and innovate, as well as his commitment and vocation of service to society.

The Individual Award went to Mr George Belinga, Cameroonian father and Spanish mother, for his career, his commitment and ethical leadership, as well as his entrepreneurial attitude and positive approach to immigration. He has experienced the difficulties that immigrants face when undertaking entrepreneurial activities and promoting social changes in the most conflictive neighbourhood of Bilbao.

The Youth Awards went to Mr Diego Echegoyen for his dedication to promoting youth in his country, El Salvador, in an adverse situation marked by polarization, crime and the lack of opportunities. The effort, initiatives and programmes put into place make him worthy of this award.

In the Small and Medium-Sized Enterprises category, the award went to Tu Primera Pega/Tu Primer Laburo; an Argentinian-Chilean enterprise that is the first digital platform dedicated to helping young Latin-Americans to find their first jobs.

In the Large Enterprise category, the prize went to Egile Corporation XXI, a corporation of Basque technology companies established in 1990, for their clear commitment to young people and their professional development, creating individualized training plans that encourage cooperation within companies.

The Institution Award went to Braval, a socio-educational support centre established 20 years ago to achieve social cohesion in the Raval neighbourhood in Barcelona and, thus, reduce marginalization and social exclusion through sport. Thanks to its work, it has managed to reduce truancy and school dropout rates. Volunteers, who act as examples to follow for young people, staff the programmes.

Finally, the Public Administrations Category has been declared void.

Next post [:en]The ONCE Foundation will help 5,000 young people with disabilities to find jobs[:es]La Fundación ONCE acercará a 5.000 jóvenes con discapacidad al empleo[:]