Young people are starting to go ‘back to the country’

Farming has as many problems as any another productive sector, with one added issue: the working population is ageing. A snapshot of the last decade of the last century reveals stunted rural environments after fifty years of mass migrations from the country to the city; a situation that also took place and is still happening in other European, African and American countries. The lack of generation changeover is affecting the development of the sector to the extent that, in some countries, the absence of young people in the fields is threatening the sustainability of farming.

This is the reason why this year’s cinematographic festival on Food Sovereignty (Bilbao, 9, 12 and 13 January/San Sebastián, 21, 22 and 23 January) is focusing on this problem, showcasing the initiatives and experiences of young people around the world who have embarked on this ‘back to the country’ initiative. Over a period of three days, 14 audio-visuals will be screened, accompanied by speeches by representatives of the Farming Union, EHNE, members of the Escuela de Formación y Acción Campesina and young farmers. In addition, the Catalonian producer, Agustín Coromina, will present ‘Education is the best way to fight’, a report on the Landless Movement that appeared in Brazil 20 years ago and that brings together thousands of farmers who have been expelled from their farms after the success of agribusiness.

The struggle for food sovereignty is the driving force that makes many young people consider returning to the fields. Initiatives, such as Plataforma Rural o the international Rural Way, channel the efforts of these young people to claim the use of the land, the building and maintenance of quality services (roads, hospitals, schools) and the creation of legislation that promotes farming.

However, reversing the impact of decades of systematic abandonment of the country also requires greater training in farming, the improved distribution of land and the diversification of crops. This is the subject of the audio-visual dedicated to the MOCASE movement from Santiago del Estero (Argentina), where hundreds of youths have mobilized to prevent the intensive cultivation of soy permanently displacing traditional products. In addition, the documentary ‘Bide Berriak’ offers a number of experiences from the Basque Country regarding youths that have returned to the farms and the need for change in the sector. 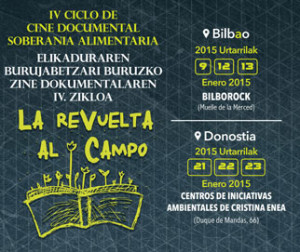