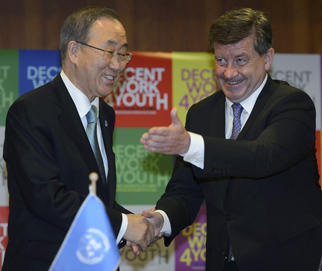 The secretary-general of the United Nations, Ban Ki-moon, took advantage of his visit to the International Labour Organization to raise awareness about the of youth unemployment “epidemic” and request governments to provide greater investment for initiatives that will help alleviate this problem. “Many young people are stuck in low wage work with no protection in the informal economy. Many others find that their schooling has not equipped them with the tools for today’s job market”, he said.

In order to reverse this situation, he proposed a number of measures that involve the States, employers and trade unions. In particular, he urged the trade unions and employers’ organisations to “empower more youth in their own structures,” and added that “trade unions have a fundamental role in promoting and protecting young workers’ rights”. He also called for young people to play an active role. “I count on your energy, your leadership and your creativity, to realize change and sustainable development”, he said.

After echoing the words of Pope Francis, who had said that “we are throwing away an entire generation”, Ban Ki-moon announced that “the UN system is implementing a system-wide action plan on youth. One priority – which is led by the ILO – is increasing cooperation on employment and entrepreneurship for youth“, he said.