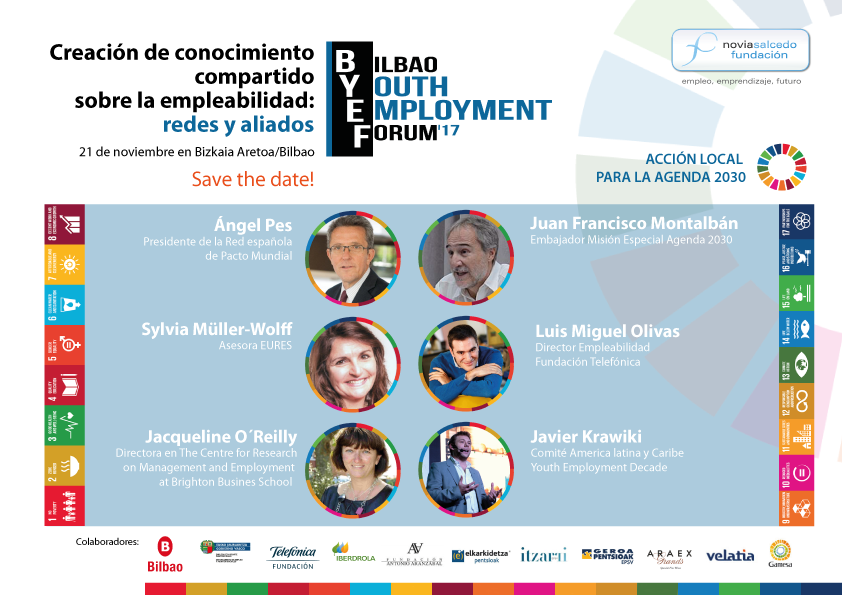 The fourth edition of the Bilbao Youth Employment Forum, which will be held on 21 November, incorporates the voice of young people as a core element PROGRAMA COMPLETO .

Youth employment, viewed from multiple angles, such as the Sustainable Development Goals (SDGs), the experiences being developed in various countries, or the roles of companies that are renewing their commitment to young people, will be the key elements of a new edition of the BYEF, which will be held on 21 November at the Bizkaia Aretoa of the Basque Country University. Organised by the Novia Salcedo Foundation, its slogan will be ‘Generating shared knowledge on employability: networks and partners’. An intense event, in which young people will take centre stage to voice their opinions and ideas regarding a problem that affects them.

The opening ceremony will be hosted by the vice-rector for Students and employability of the UPV, Txelo Ruiz, and the president of NSF, Luis Cañada. These two speeches will be followed by a discussion panel, in which representatives of the United Nations, the Spanish Government, the Global Compact, and the European Commission will analyse the policies, plans and the future of youth employment within the context of the SDGS.

Then, the director of the CROME centre of the Brighton Business School, Jacqueline O’Reilly, will speak about the strategic transitions for youth employment in Europe. Ms O’Reilly’s speech will be followed by a preview of the study titled ‘Employability Model for Young People in the ACBC’ that is being prepared jointly by Novia Salcedo and Instituto Orkestra. Daniel Gómez and Susana Franco will take the floor on behalf of these two organisations.

The fourth edition of the BYEF will include two panels that will discuss, on the one hand, national and international good practices from which we can learn something for the near future, and, on the other, case studies involving companies that are developing projects to improve youth employability. These panels will include representatives of Grupo Antolín, the Association of Family Businesses of the Basque Country, the Telefonica Foundation, and the Princess of Girona Foundation.

The great novelty this year is a programme in which young people will contribute their thoughts on the aspects that concern them most regarding access to the labour market. They will prepare proposals to build a future with greater employment opportunities.

The moderators of the three panels will be the director of CROME, Jacqueline O’Reilly (countries), the Director of Youth Affairs of the Basque Government, Ander Añibarro (youth), and the founding partner of ‘Tu Primera Pega’ (businesses), Horacio Llovet. These moderators will also present the main conclusions of each panel. The closing ceremony of the BYEF will feature the Regional Minister of Employment and Social Policies, Beatriz Artolazabal, and the Mayor of Bilbao, Juan Mari Aburto.