Excellent reception of Pegasus in New York and Washington

A delegation of Novia Salcedo Foundation presented the Youth Employment Decade in the Youth Forum 2015 and to representatives of the World Bank and the Organization of American States, among other international organizations

The Novia Salcedo Foundation (NSF) attended the Youth Forum 2015 organised by ECOSOC at the UN Headquarters in New York last 2 and 3 February where it had the opportunity to present its Pegasus Project – International Campaign for the UN to Declare the Youth Employment Decade. The event was also attended by the Spanish delegation represented by Susana Camarero, Secretary of State for Social Services and Equality, and the Director of INJUVE, Ruben Urosa, who, once again showed their commitment to the project. 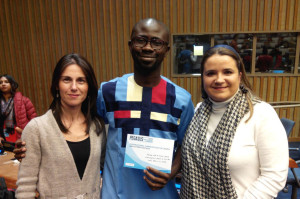 At the ECOSOC, Helena Orella and María Jesús Novo -who were accompanied by the Delegate of the Basque Government, Ander Caballero, and Naomí Gonzalo, Expert in Institutional Relations of the Basque Delegation- exchanged views with several of the organisations that were present at the event, witnessing the acceptance that the Youth Employment Decade proposed by the NSF has deserved at a time when young people are seeing how their expectations are being eroded by the current economic and employment context.

The Pan-African Union, IMJUVE (Mexico), Young Colombia, UN Habitat, Yale University, various Youth Ambassadors (Panama, Netherlands… ), US Student Associations, National Youth Councils, such as those from Botswana, Nigeria and Costa Rica, YCMYO, Nexus… were all able to obtain first-hand knowledge on the project. The same can be said for the President of ECOSOC, Mr Martin Sajdik, Ambassador and Permanent Representative of Austria before the United Nations and Ahmad Alendawi, Special Enjoy of Ban Ki-moon for youth issues.

In addition to the official events scheduled during the Youth Forum, NSF was also able to explain its initiative to UN Global Compact, whose representatives displayed their interest in cooperating with certain points of the International Campaign. Later, María Jesús Novo and Helena Orella had the opportunity to speak with Ravi Karkara, Global Adviser for Youth in UN Habitat and promoter of the World Youth Skills Day that is held on 15 July.

After this event, NSF travelled to Washington D.C. to hold a number of meetings with a view to explaining this initiative. The first stop was at the World Bank, where we had the chance to talk to Beatriz de Guindos, Executive Director for Central America, Mexico, Spain and Venezuela; accompanied by Carlos Tórtola and Rafael Domínguez, World Bank Board Members. Further meetings took place: at the Inter-American Development Bank (IDB) with Fabián Andrés Koss, Youth Liaison Programme of the Office of External Relations, Roberto Flores Lima, Lead Specialist in the Labour Market and Social Security Unit and Itzel Barrón, from the Office of Outreach and Partnerships, as well as with María Rodríguez de la Rúa, Alternate Director for Spain at the IDB. In addition, they also had the opportunity to exchange views with the Director of Social Inclusion, Betilde Muñoz, and the Head of the Employment Section, Maria Claudia, from the Organisation of American States (OAS).

Ultimately, the journey across the Atlantic can be considered a success since the Pegasus project received an outstanding level of acceptance among the organisations mentioned above. An attitude that confirms the need for the path that our Foundation took in 2013, in virtue of which, thanks to the cooperation of all the agents involved, we shall see the UN declare The Youth Employment Decade as a tool and framework to deploy the Post-2015 Goals in the field of youth employment.