Xabier Ochandiano, councillor for Economic Development, Trade and Employment of the Bilbao City Council, introduced José Antonio Marina, a philosopher, essayist, and pedagogue: “It is a privilege to introduce a person I do not know but from whom I have tried to learn for many years. I told the Novia Salcedo Foundation of my eagerness for inviting the professor if possible and I would like to congratulate you for having made it possible”, he said. 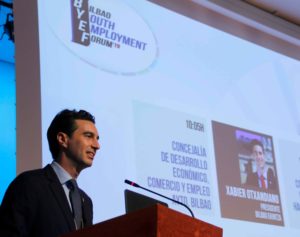 After an affectionate embrace between the two, Marina expressed his surprise at seeing so many young people in the Mitxelena auditorium and, even at the risk of affecting the structure of his presentation, he decided to change it to address the youth who packed the room because “my entire life as a researcher is really directed primarily at young people”. “First, my field of research is how human intelligence works, what we know about it, whether it is possible to expand it and whether we can really favour, teach, or learn activities that seem most extraordinary to us, such as creativity, for example”.

The philosopher highlighted the enormous confusion that exists about what the future of the working man/woman is going to be and mentioned that 60 per cent of current positions are going to be taken by robots. “To date, our experience is that whenever powerful technology is developed, the number of jobs has decreased, but immediately afterwards new jobs have appeared”. “What is happening is what I like to call the Universal Law of Learning, which is that every person, company, and society needs to learn at least at the same rate as the environment changes if they want to survive”.

He also recalled, with annoyance, that “society told young people that if they fulfilled their obligation, which is to obtain the necessary skills, we shall fulfil ours and we are going to offer you possibilities so that you can develop your life projects. Now I see that many of my students have already fulfilled their part of the bargain and are very well educated but society has said that it has nothing to offer. I think that is where the social pact was broken. The issue of education is extremely complicated and that is the fundamental problem at the moment. For those of us dedicated to this, it is proving exceedingly difficult to understand what is happening”. 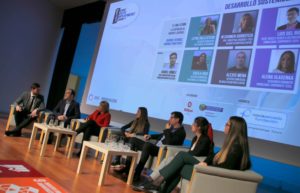 After a break, the panel of young interns and tutors in companies in various sectors began. It was moderated by Daniel Gómez, from the Novia Salcedo Foundation. The guests Leyre Ballestero (Caja Rural) and Sheila Ríos (commercial manager); Mari Carmen Gorostiza (BEC) and Alexis Mena (commercial manager); and Luis del Río (Ormazabal) and Alena Ulasenka (research engineer) dealt with several important issues regarding the mentoring of young people and how to make this a quality and beneficial experience for them.

Everyone agrees that the involvement of the two parties, the interns and the tutors, as well as considering that they are training for the future and not simply for a few months, a good work atmosphere, teamwork, and the confidence to ask any queries about the job they are doing are some of the most important aspects to ensure these work experience programmes are a success.