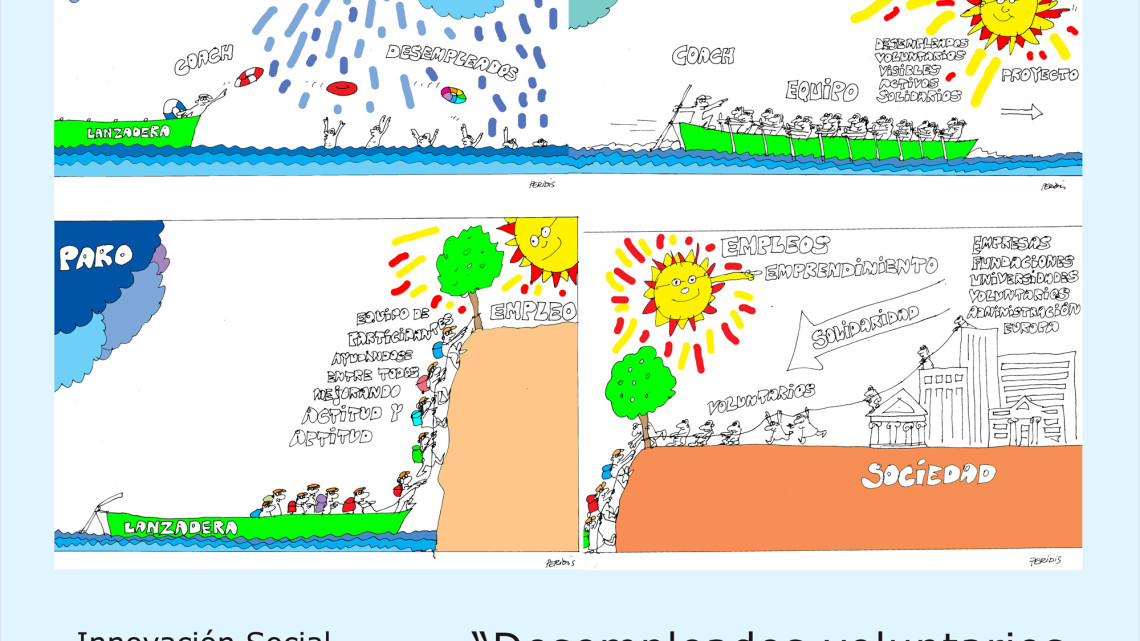 “I realized we were on the verge of a new era; and that new people were needed”. Enlightening words by José Luis Borges that indicate a starting point for the ‘Employment and Entrepreneurship Platform’ programme promoted by the Fundación Santa María la Real and its president, the architect and artist José María Pérez, ‘Peridis’.

As explained by the Foundation, it is an alternative to the policies applied to the unemployed so far. “A call for change and action, for committed and proactive teamwork to recover enthusiasm and discover all the skills and abilities people have in order to find work and/or develop a business project” emphasizes Soraya de las Sias, from this foundation based in Palencia.

They operate as a diverse team that, headed by a coordinator, generates knowledge, places people on the map and cooperates in achieving a common goal: obtaining employment, whether self-employed or working for others. To achieve this change in approach, the work method is based on coaching techniques to encourage the team, although unemployed people are the key protagonists of their own employability processes.

They encourage team building in a climate of trust and mutual support, they hold coaching sessions, work on emotional intelligence, communication and creativity; learn new techniques on how to prepare and present CVs, they analyse how to face job interviews using several strategies, they develop employability maps and learn to promote themselves as a brand, to distinguish themselves from others and position themselves in the labour market.

The first platforms began operating in 2013 in Aguilar de Campoo (Palencia) and in four municipalities of Cantabria (Torrelavega, Castro Urdiales, Astillero and Santander). The results achieved, which in many cases exceeded 60% employment success rates have encouraged the expansion of the model.

Together, they have reached five hundred unemployed people. A figure that will continue to grow gradually in the near future as another 10 platforms will begin operating in September in Logroño (La Rioja), with the cooperation of UNIR and the Regional Government; in Carcaixent (Comunidad Valenciana) and in the eight capitals of the provinces of Andalucia, thanks to an agreement reached with Andalucía Emprende, a public foundation dependent on the Regional Government.

There are success stories that have exceeded all expectations and are the benchmarks we wish to emulate, such as Aguilar de Campo and Palencia, promoted by Fundación Santa María la Real in collaboration with Obra Social La Caixa and the Fundación San Cebrian, which have achieved an 85% employment success rate.