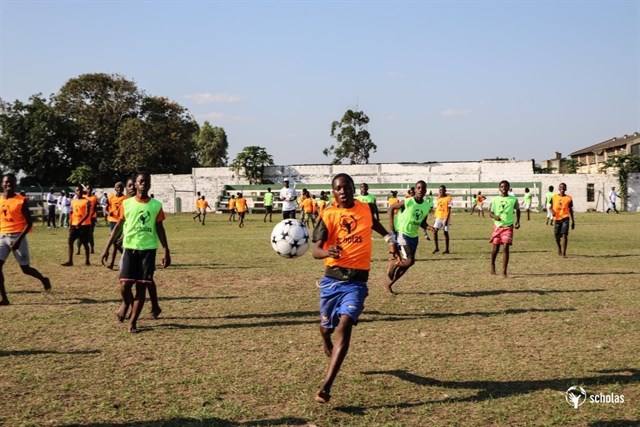 FutVal, the athletic and educational programme of the Scholas Foundation, owned by Pope Francis in Xai Xai, a district of the province of Gaza, has brought together more than 200 young people to live the experience of football based on African values for two weeks of training and learning, as reported by the Foundation.

FutVal, a Scholas programme based on such values as responsibility, honesty, effort, and teamwork is seeking to promote and harmonise an “educational pact” by teaching young people to play football with a view to recovering the essence of sport and football by teaching them to interact and work as a team and to prioritise the common good over their own. Consequently, the programme is seeking to “harmonise” the development of young people who live in vulnerable situations and get them involved in the life of their communities from a “constructive perspective”.

The closing event, which was held on Wednesday, 22 August at the Gaza railway facilities, wrapped up a project that had been held in this African country for the third time. The closing event was chaired by the husband of the Governor of the province of Gaza, Alberto Zeca; the provincial director of Education and Human Development of Gaza, Maimuna Amade Ibrahim; the World Chairperson of Scholas, José María del Corral, and a large group of government and religious representatives, as well as the media, sports managers, coaches from sports schools, and physical education teachers, who had participated in the training and provided the audience with a demonstration of the learning methodology used during the training sessions.

“It is a great honour to participate in this ceremony. It had been a dream for us and today, it has come true” said Alberto Zeca. “We are closing the sporting element but we shall soon be implementing the technological and artistic sections, which are ways of transmitting values to children who, in turn, will be the guardians of the human resources of the future. We look forward to a better society. This is the reason we are committed to the project”. On the other hand, the World Chairperson of Scholas announced that Pope Francis would be given one of the balls used during the training sessions as a gift from the province of Gaza and the first FutVal Championship in Africa, which will be held in Mozambique.

Meanwhile, the provincial director of education and human development in Gaza, Maimuna Amadé Ibrahim, described the project as “decisive” as it complements the government’s efforts to strengthen sport as a key to good education. “Let us transform the world into a great group classroom, without walls, where all social agents are responsible for the education of children by promoting values, such as effort, a spirit of solidarity, honesty, identity, respect, resilience and teamwork”, said Ibrahim.

The Scholas Foundation has launched initiatives in Mozambique, such as the first edition of Scholas Citizens in Mangunze in the summer of 2017, which attracted almost 200 students from six local schools to work together to solve issues that young people find most worrying: educational precariousness and the lack of resources to attend school, drug use and sexual harassment. In addition, in May 2018, Scholas officially opened its headquarters in Mozambique in Missão de Mangunze, and the Scholas “José Sulaiman” Surf Club, a new project located in Tofo, by means of a video conference with Pope Francis.

The foundation ensures that this “humble” area is “a spectacular location” where this sport was very popular, where young people who hardly had resources overcame their difficulties by riding the waves. The Surf Club was staffed by volunteers and social workers who helped the young people when they were “in and out of the sea”.