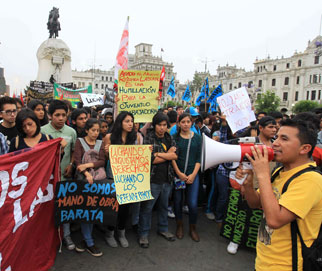 The measures being taken in various countries to enhance the employability of young people, whose unemployment rates double those of the rest of the population, are not always to the liking of the people affected. Last December, the President of Peru, Ollanta Humala, announced the implementation of a new law that will make it easier for young people aged 18 to 24 to find a job. However, as soon as the details of this proposal, with which the Peruvian government wants to reduce the level of informal employment among young people (88% of youths are in this situation), were made public, thousands of people came out to protest in the streets of Lima and four other regional capitals.

The so-called Youth Labour Law has been widely rejected because it advocates a temporary work regime for a maximum of five years, 15 days of holidays instead of the usual 30, and it does not contemplate the payment of premiums for time of service, annual bonuses, life insurance or supplements for family burdens. In addition, the unions and the opposition parties believe that companies will be able to fire older workers in order to hire unskilled young workers who they will then be able to dismiss when they turn 24.

The International Labour Organisation does not find the new law, which is still being read in parliament, very convincing either. According to the director-general of this organization, Guy Ryder, the reforms: “must try to increase education levels with a view to enabling more young people to join the labour market today and tomorrow, more investment and the use of state-of-the-art technology”. In a document prepared on occasion of the controversy about this proposal, the ILO mentions that Peru “already has mechanisms to promote the hiring of young people, such as youth training programmes, pre-professional work placements and training-professional contracts”. In addition, it mentions the “Jovenes a la Obra” programme promoted by the Ministry of Labour to help especially vulnerable young people and that combines training in particular jobs with labour experience. “In this regard”, the note adds, “perhaps it would have been more relevant to increase the resources for this programme to extend its coverage to a greater number of young people and to promote existing hiring mechanisms”.

Peru reached the end of 2014 with a 13.7% youth unemployment rate, three points less than in 2009 and below the figures for countries like Argentina, Brazil, Colombia, Ecuador, Chile and Uruguay. However, the informal nature of work is one of the great evils affecting young people and one of the concerns of governments in the region. According to the ILO, the decrease in labour benefits does not necessarily translate into a reduction in informal employment. In the case of Peru, “the impact of laws 28015 and 1086 applied to promote the formalisation of employment in micro-businesses has not proven such a result, as the decline in informal employment has been much less than in medium and large companies”. A ManpowerGroup study identified that the main difficulty that companies encounter is the shortage of skilled labour. Therefore, the ILO calls for enhancing the qualifications of young people and improving the training offered.