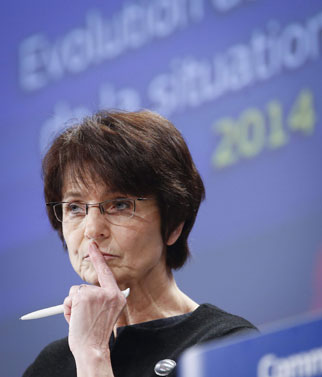 The Commissioner for Employment, Marianne Thyssen, has said that the high level of youth unemployment in Spain is “unsustainable”. The great gap between permanent and temporary contracts is still one of the main problems of the labour market. “The unemployment rate in Spain is high and it is particularly high among young people, too high, and it is not sustainable, however, there has been an improvement”, said Thyssen during a press conference to present the report on the EU employment situation in 2014.

“There is a marked segmentation of the labour market in Spain and this could be one of the aspects in which Spain could improve”, the new Commissioner for Employment has indicated. The report reveals that during the economic crisis between 2008 and 2014 a total of 6.7 million jobs were lost in the EU. 3.4 million jobs were lost in Spain, Italy lost 1.2 million and Greece, 1 million, while employment improved in Germany with 1.8 million jobs and in the United Kingdom, with 900.000. The Commissioner stressed that the economic recovery in the EU is “limited and fragile” and that unemployment, despite having dropped in 2014, is still “too high”, 10% on average. “Job creation is taking place but it is too slow”, she complained. In addition, new jobs do not guarantee a sufficient standard of living and long-term unemployment is on the increase.

Thyssen has mentioned Denmark, Austria, Sweden and the Netherlands as examples of countries that have best weathered the unemployment crisis. In her opinion, this is because they have a “more deregulated and segmented labour market”. She also praised the social welfare systems of Malta, Luxembourg, the Netherlands and Austria because they invest more in education and childcare, enabling a higher rate of female employment. Thyssen has stressed the need for further structural reforms in the labour markets of Member States and a reduction of the tax burden on labour, particularly in contracts for young and low skilled people.

This website uses cookies to improve your experience while you navigate through the website. Out of these, the cookies that are categorized as necessary are stored on your browser as they are essential for the working of basic functionalities of the website. We also use third-party cookies that help us analyze and understand how you use this website. These cookies will be stored in your browser only with your consent. You also have the option to opt-out of these cookies. But opting out of some of these cookies may affect your browsing experience.
Necessary Always Enabled
Necessary cookies are absolutely essential for the website to function properly. This category only includes cookies that ensures basic functionalities and security features of the website. These cookies do not store any personal information.
Non-necessary
Any cookies that may not be particularly necessary for the website to function and is used specifically to collect user personal data via analytics, ads, other embedded contents are termed as non-necessary cookies. It is mandatory to procure user consent prior to running these cookies on your website.
SAVE & ACCEPT
cool cat pick up lines top dating app for free iphone