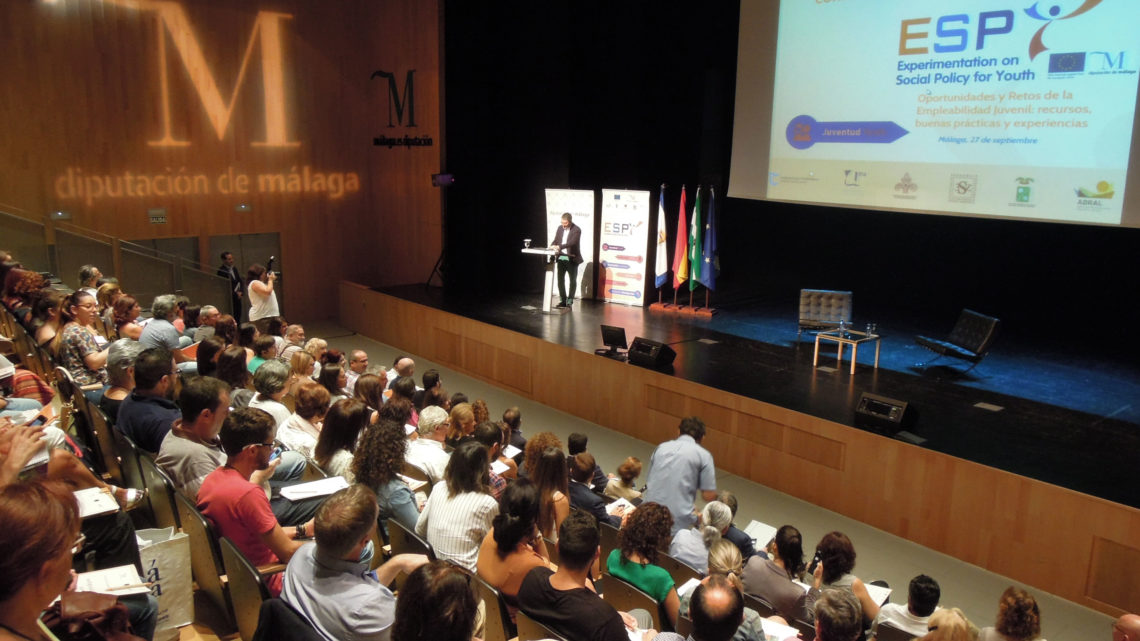 The Provincial Council of Malaga and entities from Ireland, Portugal, Greece, Italy and Hungary have been testing several initiatives within the European ESPY project for three years

Young people living in some rural areas of the European Union have greater difficulties in finding employment. The need to travel to the capital or to other cities to take higher studies is an issue for many teens. Because of economic problems or lack of interest, they may decide to give up their studies after completing their compulsory education and try to find a job where there are hardly any opportunities for low-skilled workers.
In an attempt to prevent youth unemployment in rural areas, the Provincial Council of Malaga joined the European ESPY (Experimentation on Social Policy for Youth) project three years ago. With a budget of one million euros and the participation of the University of Malaga, this initiative has designed actions to provide young people aged 15 to 24 with the skills and abilities that will allow them to find a job or take up their studies again. In addition, the project has provided the necessary resources to ease their transition from education to employment.
Four hundred and eighty-four young people at risk of social exclusion took part in the project, of which half benefited directly from the new ESPY actions and the rest enjoyed the provision and implementation of traditional resources. In addition, teaching staff, workshop monitors and business people joined the initiative to interpret and assess the results.
The measures were based on the age of the candidates. In the field of education, boys and girls aged 15 to 16 years took part in motivational and discussion groups for teachers, as well as in workshops aimed at developing their skills and in family workshops. In the case of people over 16, besides the above, the actions designed included work experience, consisting in three volunteering actions in various organisations or companies involved in various sectors of society. Additionally, an employment club was set up in the district centres of the social services where young people could go to receive information and advice. The project also envisaged setting up participation workshops, meetings of young people and exploring social networks as a tool for training and employment

After three years, the ESPY project managers in Malaga have revealed that the actions implemented have contributed to improving the attitudes of young participants and their actions when looking for jobs. “Youth unemployment is linked to attitude and motivation. Shortcomings in these fields are the main difficulties young people face when transitioning from unemployability to employability”, says the report. Therefore, it stresses that the coaching techniques, neuro-linguistic programming and emotional intelligence provided have proved a success because young people “have been the protagonists and we have listened to them”.
The study reveals that the participants have been able to overcome the feeling of the inevitability of unemployment, the lack of economic resources and loneliness, and move on to a new scenario in which they have been able to connect with professionals, resources, companies and, in particular, with other young people and create new opportunities for change. This support network has been especially important for women with family responsibilities, as it has allowed them to start looking for jobs. Therefore, “after waking to a new consciousness, they are now demanding support and motivation until they can consolidate their goals”.
Another chapter focuses on recommendations for the future. One of them stresses the need to continue working to improve the self-esteem of these young people, “because if they gain in self-confidence their performance will improve as well as their initiatives to find jobs, since initiatives from businesses have been rather limited”. In addition, the advice is to commit to global intervention strategies that include actions in the fields of training and employment. Another key point, according to the authors of the report, is to provide counsellors, both while they are of school age and once training is complete, to provide them with information on the different alternatives related to their interests and professional goals. A task, together with the improvement in skills and abilities, which should begin before the age of 15 because “when a young person reaches this age, they find it more difficult to bring about a change in attitude”.
These conclusions and many others were presented on 27 September during the final ESPY conference. This event, held at the headquarters of the Provincial Council of Malaga, was attended by the other European partners of the project, which, in turn, explained their experiences in youth employment policies. In addition, Diego Rodríguez Holgado, Services Supervisor at the Ministry of Employment and Social Security, highlighted the best practices of networking, such as the RETOS Network, and Claire Grapeloux, head of Social Innovation of the European Commission, gave a presentation on promoting youth employment and social innovation in the EU within the EaSI programme.