The challenges of today, jobs for tomorrow 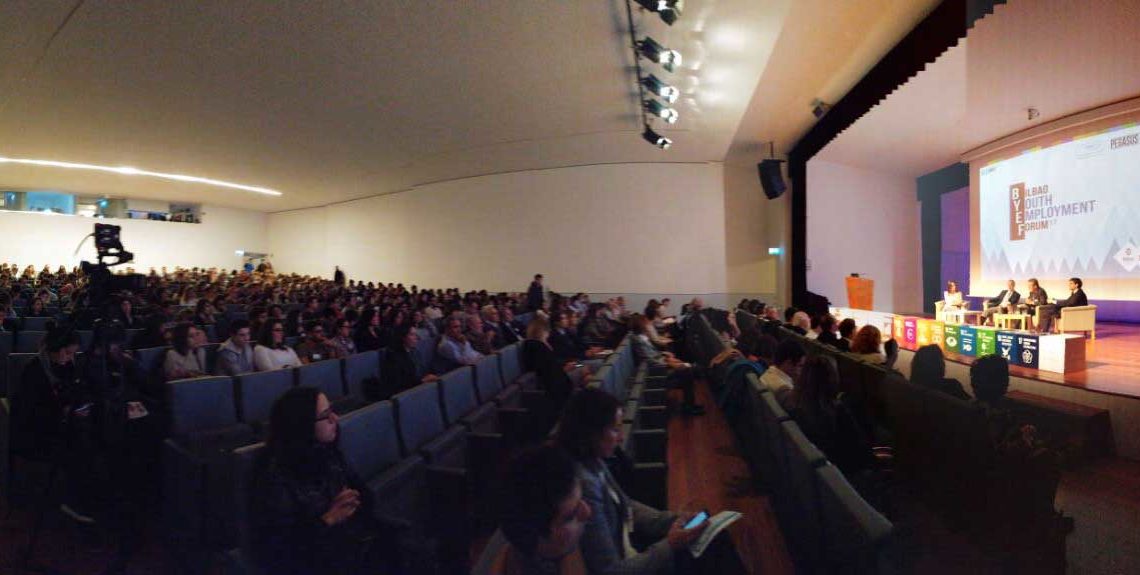 Involving institutions, organisations, and society in general to put into place local and international policies to end youth unemployment and improving the transition of young people from the field of education to the world of work were two of the main measures raised by many of the representatives of international organisations present at the Bilbao Youth Employment Forum (BYEF).

This was precisely one of the conclusions of the report submitted by Professor Jaqueline O’Reilly, director of CROME (Centre for Research on Management and Employment at the Brighton School of Business). Some of the measures mentioned in her report on employability are based on the idea of “intervening at an early age in education to identify which young people need more support, to implement a more proactive approach, and even encourage individual mentoring by public employment services”.

As stated in the study titled ‘Youth Employability Model in the ACBC’ submitted by Daniel Gómez, from the Novia Salcedo Foundation, “the main reason why young people seek employment is to promote their autonomy and achieve the quality of life standards that allow them to develop as individuals and as professionals.” Therefore, it is not surprising that Susana Franco, the representative of the Orkestra Institute, emphasised “the need to establish joint strategies involving companies and society since we are all responsible for improving employability, employment and welfare in general.” The lack of jobs is not something that just affects an individual; it is a problem that makes society more vulnerable and even affects its general welfare.

To all this we must add, moreover, that “we are living in a period of unprecedented transition between a society based on analogue technologies to a digital-based world that is highly connected, i.e. a global world”, said Ángel Pes, president of the Spanish Global Compact Network. This is why we must take into account that working in the digital world will not be the same as working in the analogue world; hence, according to Pes, the approach young people should have when preparing for a job should be based on three key elements: education, languages, and boldness. “In terms of training, the public sector should be involved in providing this service adapted to the needs of this transition, but it is very important that young people show a commitment to their training. Languages are also necessary in a global world in which it is advisable to speak at least a couple of languages in addition to your mother tongue and, that boldness will allow young people to develop their creativity, a key element in today’s world”, according to Pes.

“Youth unemployment in Spain is a serious matter that has reached a rate that almost doubles that of the EU. Making progress in regard to the 2030 Agenda will enable us to contribute better innovative, sustainable, and forward-looking formulas regarding jobs for our young people”, said Juan Francisco Montalbán, Secretary of State for International Cooperation, Latin America and the Caribbean, and Spanish Ambassador on a Special Mission for the 2030 Agenda. In this sense, he stressed that a coordinated, practical, technical and optimistic dialogue is being conducted with the autonomous communities because, in fact, “the 2030 Agenda is an agenda of national policies and international cooperation”. With this in mind, according to Motalban, we have to maintain a high rate of economic growth and implement active employment policies, particularly regarding young people, based on a range of public measures and resources. In other words, reformulating educational policies to deliver the highest quality, to be competitive, and link them to economic activity. “We have to change the economic model gradually to bring us closer to the world of employment”, he said.

According to the president of the Spanish Global Compact Network, Ángel Pes, the 2030 Agenda is the best way to progress from the 19th/20th century to the 21st/22nd century “because it brings to the table all the problems that need to be brought to the table and, in addition, it has achieved the historic milestone of being signed by 193 States”. It is also a roadmap that all countries have committed to supporting, and that can only be successful by joining the forces of the public and private sectors and making society aware that it should extend its full support, and demand that the players fulfil that to which they have committed.

Ángel Pes: ” It is very important that young people show a commitment to their training”

Juan Francisco Montalbán: “We have to change the economic model gradually to bring us closer to the world of employment”

Pablo Cornide: “We have to start thinking in terms of intergenerational solidarity”

The role of the EU

In the European Union, the main political plan against the lack of employment among young people is the Youth Guarantee Programme that was launched in 2013, when the employment crisis peaked, and countries had youth unemployment rates above 30% and a total of more than 6 million unemployed young people in the EU. “Now we are doing a bit better, but we have to continue working”, said Pablo Cornide, main administrator of the Employment Strategy Unit of the European Commission.

What is the Youth Guarantee? “It is the political commitment of member states to offer young people under the age of 25 a job offer, education, training and lifelong learning or a work experience offer within four months after they leave their latest job or school,” explained Cornide. The 28 member states have adopted specific plans to implement this guarantee, and there are European funds that help to launch these programmes, but it is very important to know that the Youth Guarantee Programme could not function without the commitment of the member states and their financial commitment.

The purpose is not only to offer specific opportunities but also to try to reform the entire school-to-work transition. “The first results reveal that for the first time, many countries are thinking about early intervention policies so as to be able to deal with the problem before it happens”, stresses Cornide. However, there are still many challenges on the horizon that need to be addressed. “We have to start thinking in terms of intergenerational solidarity, what is going to happen to young generations with regard to job opportunities that past generations enjoyed, we have to attend to the inequality in accessing services and social protection and how it affects young people”, concluded the main administrator of the Employment Strategy Unit of the European Commission.