The dual effort of competing and working 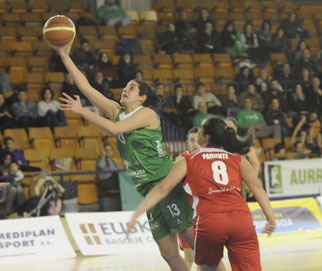 “I always say that you can do anything if you organise things correctly. When I finish work, I have a few moments that I use to have a cup of coffee and then I go training. Yes, sometimes you are a little tired but that does not prevent you from performing at your usual level”. Laura Pardo, 25, has been playing basketball for twelve years. Like many other amateur sportspersons, the career of this woman from Vitoria has been linked to her academic and professional life, which is why she has played in teams, such as Canoe in Madrid – three seasons on a sports grant -, Irlandesas from Leioa, taking advantage of the fact that she studied the first year of her degree in Business Management and Administration in Bilbao. She even played in an Irish team. “Last year, I worked in Ireland for six months in a publicity agency on a grant from the Basque Government and I couldn’t resist playing in a First Division team there. My interaction with my team mates allowed me to improve my English very much”, says the current captain of Araski from Vitoria, which plays in the Women’s League 2.

This experience in Ireland enabled Laura to learn to overcome the difficult balance between sport and work, a reality experienced by thousands of sportspersons each day. After returning to Araski, in October last year, she has been replacing a worker on maternity leave at DHL, where, in the mornings, she manages the deliveries of all the material Nike sends to Spain through Foronda airport and, in the afternoons, she is responsible for customer services. “DHL has made things very easy for me so that I can continue playing basketball”, she says gratefully.

The job allows her to train twice a week and play on a third day. Paradoxically, the greatest problem for Laura arises when they play at home. Trying to attract greater support from the crowd, this season matches are played on Fridays at 20.30. “I was not in favour because it is not the same thing to play on a workday than on a Saturday, you get up later, you might eat at home quietly, you can have a nap … “, she explains. The demands are no less when they travel to play other teams in their category, even though the matches are on Saturdays. The trips to towns in Castilla y León, Galicia or Extremadura “are a bit long and boring”. Laura Pardo, like her team mates, is realistic about her future in the sport. “We neither earn our living nor are we going to earn our living from basketball. I hope I can play for many more years but, if one day I can no longer reconcile sport and work, I will have to stop playing”, say admits.

Grass hockey is another one of those sports in which players live out of the spotlight of fame and do not see the huge amounts of money that football or professional basketball handle. Aitor Cubero has ample professional experience as a plumber, a career he interrupted for a few years to work as a site manager. Aged 38, he has been sacrificing his free time since he was 20 to enjoy this sport in the Kale Lagunak in San Sebastián, where he has been playing since it was founded in 2002. He previously played one season in the Atletico San Sebastian. 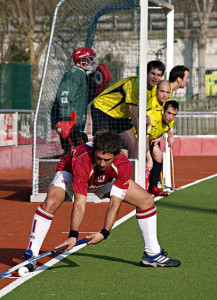 “You have good and bad days. As I am self-employed I can organise things better but if you work for a company, it all gets a bit more complicated. In A and B Honours Division, trips can be long (to Valencia, Benalmadena, Cadiz … ) and matches are played on Sundays, so you need Monday off to rest”, he says. Cubero changes the tools of his profession for his hockey stick on Mondays, Wednesdays and Fridays, from 20:00 to 22:00. “The training sessions enable me to disconnect: I do sport, I laugh with my team mates…” he explains.

However, he ensures that he is on the last leg of his sporting career: “I may retire this year, but it we make it into Honours Division B – the Kale Lagunak is in the north district of the First Division with possibilities to play the play-offs – I shall carry on for another year. It is difficult to reconcile work and sport but it is worthwhile for me, that is why I have been playing for so many years”.