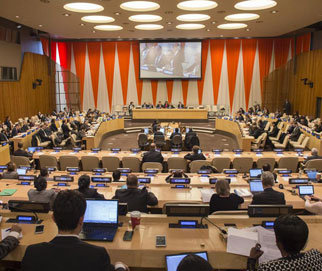 This conference took place in New York City from March 30 to April 1 and unveiled some future trends expected in the labour market and some persistent issues that remain today. First of all, the global employment growth rate stood at around 1.7% from 1991 to 2007. In recent years it has fallen to 1.2% due to the severe socio-economic crisis. Experts suggest that we will need to create a total of 27 million jobs in the coming years to put an end to this critical historical period and to absorb the new workforce. To conclude with the global trends section, it should be noted that during 2014 almost 6% of the employed workforce did not really have a job.

On the other hand, regarding the social dimension of employment, youth unemployment worldwide reached an average figure of 13%, a totally unacceptable value that constitutes a barrier for the employability of the youngest people and places an entire generation in dire straits. Furthermore, this figure triples general unemployment figures. We must also add that almost half of the working population worldwide is in a vulnerable situation, especially groups such as women. If we divide the world into regions, 76% of the jobs in Sub-Saharan Africa and Southern Asia suffer from high vulnerability levels.

Finally, the investment in human capital in developed countries resulted in an 11% increase in GDP from 1991 to 2011; however, in the particular case of emerging countries, this value was twice as high. Furthermore, 34% of the workers in these countries belong to the middle class, which is an encouraging fact. A powerful middle class is an unambiguous welfare indicator in any country; the larger this group is, the greater the democratic guarantees and economic prosperity will be.