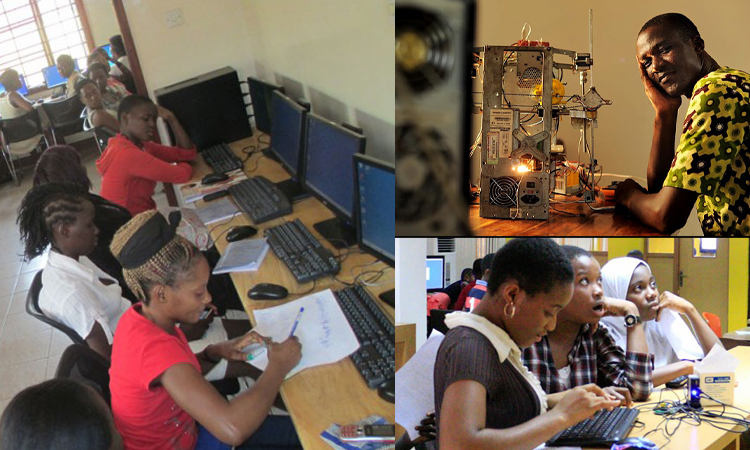 If you want to go fast, go alone; if you want to go far, go together.  This old African saying is illustrative of a trend that is growing on the continent: work via Tech Labs, spaces that serve as a meeting point for young people seeking to realize their concerns, share experiences, establish alliances, exchange knowledge and work together on technological innovation projects in the Open Source movement.

In short, Tech Labs are helping to connect some young people with others, overcoming the barriers imposed by frontiers, languages or the disparity of knowledge and training.

In 2012, the architect and anthropologist Sénamé Koffi Agbodjinou founded a small urban laboratory in Lomé, the capital of Togo, to research, experiment and build technology at street level, the result of collaborative and communal work. Convinced that a city would be more sustainable if it adopted certain features that are typical of villages, Sénamé created a space that could benefit from a collective spirit and, at the same time, attract the activity and the know-how of the local people, resulting in transforming projects. Thus, one of his most emblematic creations came to exist, W.Afate, a 3D printer that was built from waste products by Afate Gnikou, a young local man.
Interestingly, one of the resources available to many African countries is trash. More specifically, electronics, which could become a pest for the continent and that WoeLab is trying to transform into an opportunity. After establishing W.Afate, Sénamé gave design classes and took his people to Internet cafes so that they could become familiar with them.

An experimentation laboratory used to hatch ideas and transform them into market solutions. This is the description of Co-Creation Hub, a social business that helps find seed capital for technology entrepreneurs to generate solutions to the problems facing society through open innovation. In 2011, Bosun Tijani and Femi Longe launched this initiative in Lagos. It has led to a number of projects ranging from the creation of a system that connects hospitals with blood banks in sub-Saharan Africa, to a platform that connects pregnant women and new mothers so that they can share experiences on motherhood, to an application dedicated to promoting and preserving the cultural wealth of Africa. However, perhaps one of the most interesting projects that has resulted from Co-Creation Hub is Wecyclers, which provides low-income communities in developing countries with the opportunity to tap into the value of rubbish and clean-up their neighbourhoods through incentive-based recycling.

The ambitious goal proposed by the founders of Women in Technology Uganda WITU in 2012 was to bridge the technological gap between men and women in Uganda. To date, almost one thousand young Ugandans from deprived areas have received training in their workshops on technology and entrepreneurship. Many of them have developed business plans based on identifying a technological need or problem with the advice of a collaborating expert and have obtained seed capital to implement them. In addition, they conduct training programmes for girls on coding, mobile applications, games, animation and programming languages.

In October 2010, a very young Karim Sy Jokkolabs launched Jokkolabs, the first French-speaking collaborative work space in Africa and it soon expanded to Burkina Faso, Mali and the Ivory Coast. Jokkolabs works as a community of technology entrepreneurs that share values, such as cooperation and openness, and that over a period of six years have supported projects related to training and the development of printers and mobile applications.