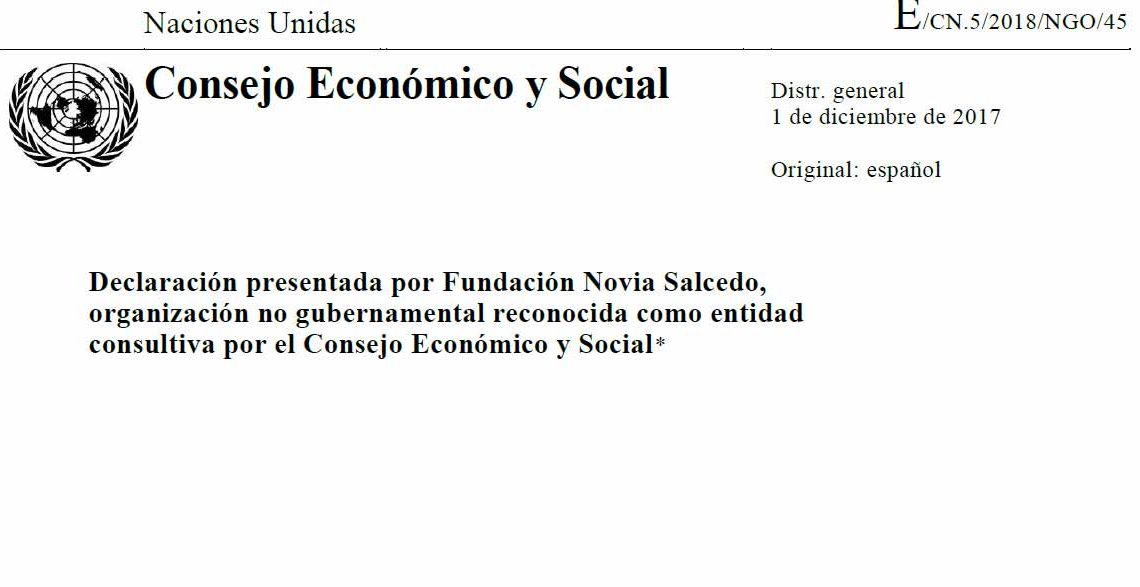 The Foundation submitted the written statement within the framework of the 56th Session of the Commission for Social Development, which will take place from 31 January to 7 February

On 1 December, taking advantage of its consultative status within the UN Economic and Social Council, the Novia Salcedo Foundation submitted, for the second consecutive year, a ‘written statement’ titled ‘A Youth Employability Model as an Accelerator of Sustainable Development for All’. It was a contribution to the 56th Session of the Commission for Social Development, which will be held in New York in the first week of February, and where various strategies for the eradication of poverty will be discussed.

The NSF report, after being accepted by the evaluation committee, has finally been published on the United Nations’ website in Spanish and in the rest of the official languages used by this international organisation. This is a milestone that highlights the value of the contributions that this Foundation, based in Bilbao, has put forward so that the youth unemployment issue can be addressed in the major world forums.

In its statement, Novia Salcedo contextualises the lack of jobs facing young people in Spain despite the number of higher education graduates exceeding the European average. “Given the overqualification of youth in Spain, it is the duty and responsibility of all, starting with public institutions, to provide young people with access to jobs that improve their ability to advance professionally in the future”, it states. Spain is also the EU country with the highest proportion of young people at risk of poverty or social exclusion.

It then goes on to stress the work done in favour of youth employment. Only in the year 2016, the NSF trained 1,021 youths to improve their employability and managed on-the-job practical training for another 867, with the collaboration of 323 companies. A total of 675 young people signed employment contracts after their training with the Foundation, which also promotes forums, such as the BYEF, at which possible solutions are discussed and success stories presented.

The written statement then focuses on explaining the model implemented, the purpose of which is to serve “as a firm foundation from which it can launch, as effectively as possible, its efforts to promote the growth of youth employment and thereby cut poverty rates”. The collection of information from 304 young people on their job skills, motivation and values is the basis on which the Foundation wants to implement a method that “offers a new appreciation of the problem of youth employment by involving both young people and companies”.