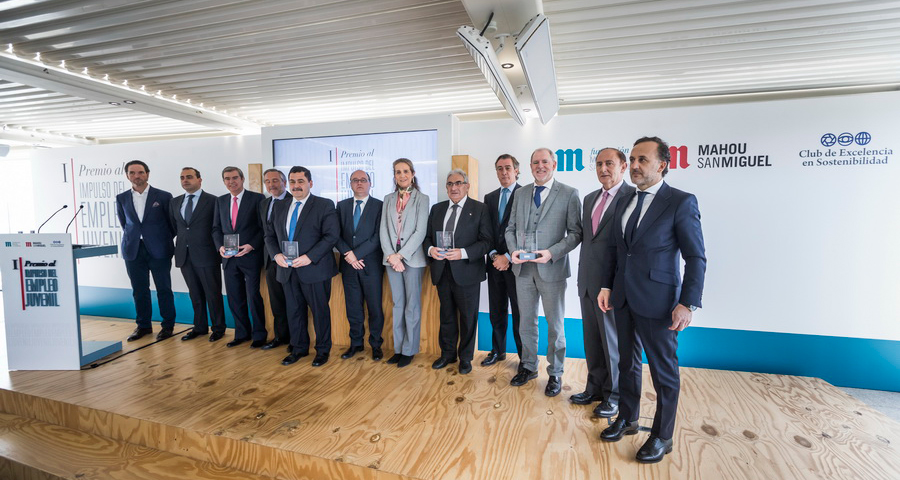 The goal of generating employment opportunities for young people in Spain has not only been implemented in the various public administrations, it makes up an important chapter in the projects of a multitude of companies and non-profit organizations. The initiatives that have been designed by four of them have obtained the recognition of the Mahou San Miguel Foundation during the first edition of its Youth Employment Promotion Awards.

These awards are divided into three categories: Third Sector/Educational Institution, Large Companies and SMEs/entrepreneurs. In the first category, the prize went to the Mapfre Foundation, for its ‘Juntos somos capaces’ (Together We Can) and ‘Accedemos’ projects. The former has been designed to favour the job insertion of people with intellectual disabilities or mental illness, and it enabled 430 people – 80% under the age of 40 – to find their first jobs in 2016. “They are involved in work experience plans to enable them to find jobs. Since 2010, more than 1,900 people have found a job”, according to the Foundation. In the six years that have elapsed since the launch of the programme, close to 3,000 companies have joined it. “We want them to become the driving force that will transform society in terms of equity and social cohesion”, they stress.

In the Large Company category, the winner was Alcampo, which submitted two high-impact projects. One is based on 152 training programmes that, from January 2015 to November 2016, allowed 662 young people to enhance their personal, social, and professional skills and, therefore, the possibility of finding work. The other initiative seeks to promote the incorporation into the labour market of university talents or new graduates at three levels: through paid curricular practical training, their incorporation into positions of responsibility, or their integration into international profiles. Last year, more than 160 young people took part in these programmes and 18% of those that were hired occupy managerial positions.

S2 Grupo de Innovación en Procesos Organizativos won the Mahou San Miguel Foundation prize in the SME/Entrepreneur category thanks to their commitment to job creation and providing stable employment. The initiative, called Enigma, is a cyber-security school that aims to deliver specialized training for graduates in Industrial Engineering, Computer Science and Telecommunications, to recruit talents at universities and then employ them once they have been trained. This training programme covers a period of six months and, from the moment they join, the young people are given a grant, which means that the training is free for them. “The stable employment of young people provides a competitive advantage to S2 Grupo because they bring new ideas and different perspectives that allow us to keep growing”, says its partner-director, Miguel A. Juan. In the last year, this company’s staff has increased by 15%, totalling 225 employees at its offices in Valencia, Madrid, Barcelona, Bogota, and Mexico. 39 of the 64 new jobs were for people under the age of 30.

In addition, the Secretariado Gitano Foundation received an honourable mention for its ‘Aprender Trabajando’ (Learn while you Work) project, within the framework of the Youth Entrepreneurship and Employment Strategy, which targets young gypsies who have not finished their obligatory secondary education and have no prior work training or experience and who have difficulties accessing the labour market. This is a methodological model that is based on two six-month training stages and that includes work experience in leading companies in the sector. Secretariado Gitano emphasizes the effectiveness of ‘Aprender Trabajando’ regarding the participants’ job prospects. “The average employment percentage for the 17 projects stands at 50%, i.e. a total of 124 young people found a job within two months after finishing the courses, of which 85 were hired by the companies where they had been trained”, they say. In addition, the project has been revealed as a way of encouraging people to go back to school. The reinforcement of basic skills has enabled 92 young people without qualifications to consider finishing their obligatory secondary studies, i.e. 36% of the participants.

A panel consisting of ten experts and professionals in the field of business and the social sphere selected the winners, which received their awards last March. Their decision was based on the impact the projects had and on the value they contribute to stable and top quality employment, especially in the case of young people with difficulties.