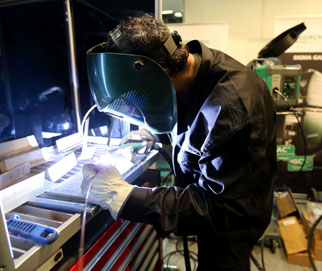 Since the crisis broke out in late 2008, the various business sectors have suffered to the point where they have been forced to fire a large number of staff due to a lack of capital. This trend has increased in recent years, reaching new heights. However, not everything is bad news. Industry has managed to survive – relatively – this downturn as it is the heart of a country’s economic system. Such is the current growth in this sector that labour is at a premium. For example, the Spanish industrial sector has grown at a rate of 3% per annum since 2013; recovering its level of contribution to GDP prior to the crisis. As a result of this trend, the programme ‘Young Industry’ (Industria Joven) was launched in April. It is promoted by UGT-Euskadi and co-funded by the Youth Programme 2014, dependent on the General Directorate of Immigration of the Ministry of Employment.

This initiative seeks to train, inform and support young people through an on-line service geared to supporting this sector. However, young people must meet a number of requirements: they must be under 35 years of age, hold Spanish nationality and live abroad. After accessing the ‘Young Industry’ website (industriajoven.ugteuskadi.net), users will find a number of sections dedicated to training, job opportunities, a guide for entrepreneurs, and those who decided to sign-in may access a guidance centre where an expert will “analyse key issues, such as having a profile on social networks or a good CV”, stresses Iván Liedo, 27, from Barakaldo. According to the project director, Felipe García, “we want young people to come back by providing stable conditions in the industrial sector”. And, he adds: “Our philosophy is to try to promote quality employment for young people, which is the group suffering most severely from unemployment”.

Liedo, like many other young people, was forced to emigrate in search of work; first to Melbourne (Australia) and Stockholm (Sweden). Thanks to a Confebask grant, he had the chance to move to the United Kingdom in November, where he now resides and has been working since May in a medium-size enterprise dedicated to designing industrial kitchens for hotels, restaurants or residences. Thanks to the grant, he also learned of the existence of the programme, which provided him with guidance to train and study for the industrial sector. “Any information and guidance is more than helpful”, says this young man who is still pondering whether to return to his industrial town, although he would like to in the future: “My plan is to stay here until the end of the year and then I shall continue here if I cannot find a decent job”.

Like Iván, many other young people have visited the platform seeking more information; as can be seen from the visits to the website, which are far beyond the targets established when it was launched. From an initial estimate of 600 users of the free access area, the end result has been 4,157. The difference with regard to the participation in the individual guidance virtual channel has not been so good, totalling 12 despite the first calculations of two percent less. The United States (894), Italy (323) and Russia (254) are at the top of the ranking regarding the basic visit mode. Some people who accessed from the Netherlands, United Kingdom, Mexico, Argentina, China and USA have required professional guidance, “always with a smile and willing to help” says Iván Liedo.

In fact, users have the opportunity to evaluate the training offered. The scores given by people who have received guidance from “Industria Joven” are 4.1 and 4.7 (out of 5), respectively. The profiles of visitors generally correspond to industrial technical engineers, as well as civil and chemical engineers. The platform provides tips and new employment opportunities for people who do not have a clear idea about their future.