“Employment is the number one challenge of the 2030 Agenda” 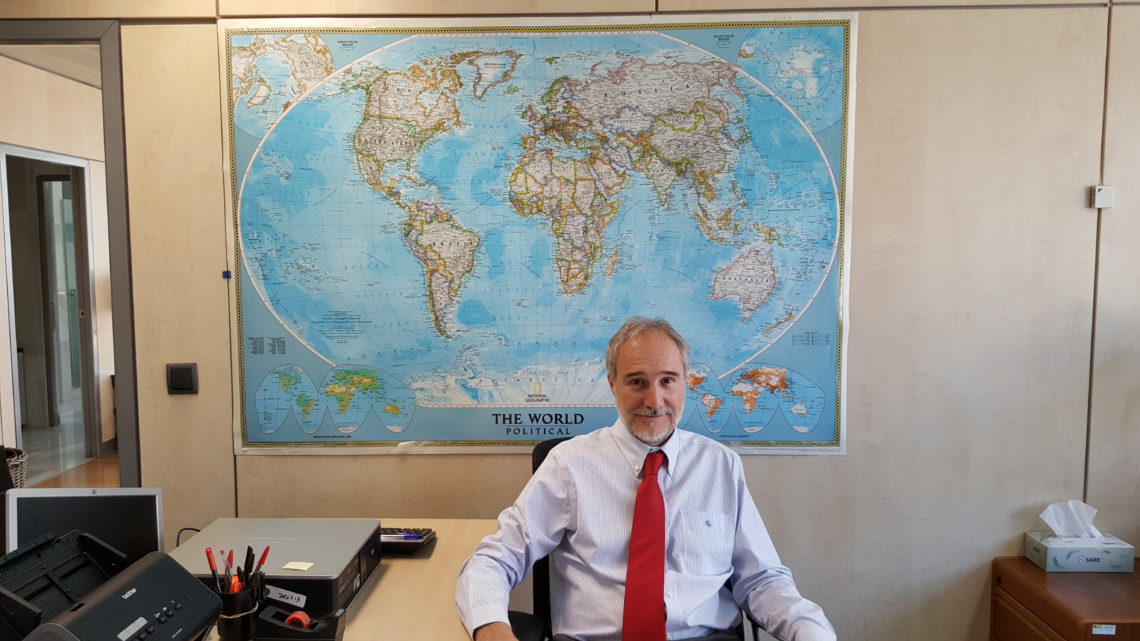 The diplomat Francisco Montalbán has one of the most important challenges of his career before him. In May, the Government appointed him an ambassador on a special mission to promote the implementation of the 2030 Agenda goals in all public policies in Spain. A task he is undertaking with “enthusiasm and a sense of responsibility” convinced that, if successful, “we shall see a much better world” within thirteen years.

– The Government has just appointed you ambassador on a special mission regarding the 2030 Agenda on Sustainable Development. What do you think about this new professional project?

-The 2030 Agenda is an unprecedented and ambitious global agreement on sustainable development. It implies a change of paradigm regarding what was understood by development aid policies. By integrating the economic, social, and environmental aspects of development, the challenges become global and are shared by all countries and all players, not only national governments, but also by regional and municipal authorities, companies, universities, civil society… If we are successful, we shall see a different and far better world by 2030. I can only address this new challenge with enthusiasm and a sense of responsibility.

-My job is to assist the Secretary of State for International Cooperation and for Latin America and the Caribbean, and the Minister of Foreign Affairs and Cooperation to promote the implementation of the 2030 Agenda in Spain. On the one hand, by facilitating its implementation in national public policies, working alongside other ministries and public administrations so that they can perform their tasks and exercise leadership in their respective fields of competence. And, on the other hand, adapting cooperation for development policies and, more broadly, foreign policies to the 2030 Agenda. As an Ambassador on a Special Mission, my task is to disseminate the Agenda, represent Spain’s commitment, encourage everyone to make a commitment, and serve as a point of reference regarding the implementation process in the State Administration.

– How is the Spanish Government cooperating to achieve the goals set out in the 2030 Agenda?

-Spain, represented by the Head of State, His Majesty the King, pledged to implement this Agenda fully at the World Summit in 2015, when it was adopted. Our government’s commitment is to ensure its full implementation. Recently, a 2030 Agenda Top Level Group has been put together that is dependent on the Government’s Executive Committee for Economic Affairs, which will be chaired by the Minister of Foreign Affairs and Cooperation. The Vice-Chair shall be held jointly by the Minister of Development and the Minister of Agriculture and Fisheries, Food and the Environment, and all the other ministries will be represented by Secretaries of State or General Directors. This is a key step, which provides the necessary institutional support to mobilise public policies and involve the relevant departments.

– What do you think are the main obstacles?

-There are many, no doubt. I would mention two. Since one of the Agenda’s goals is to integrate social, environmental, and economic aspects in all public policies, the first challenge is to break through those impenetrable sectoral compartments. We are accustomed to working in isolation, with a sole purpose in our sector or field of responsibility. Inter-agency coordination is a challenge, especially for public administrations. The second issue is that, since the SDGs are directed at the root causes of problems, they involve significant changes regarding production and consumption models, in order to respect the planet, and regarding economic growth patterns, to make them more inclusive so that they can generate equality and also sustainability. The transition will not be easy nor immediate. It will require consideration, assimilation, strategy, agreements, additional resources…

-You have had a long diplomatic career in Latin America. When you witness poverty in person, does it increase the awareness of the need to work to eradicate poverty and reduce inequality?

-Without a doubt. Although poverty and inequality can also be found in our cities, in our neighbourhoods, the dimension it achieves in countries with lower levels of human development is striking. You see the world differently. You are especially motivated to attend to political and ethical requirements, the development of societies that are more just and supportive.

-Combating youth unemployment is another cause sponsored by the United Nations. How do you think this challenge should be addressed?

-The concern for youth and employment was a key aspect when the Agenda was designed, and it can be seen in the SDGs. The 2030 Agenda, in fact, tries to respond to the great generational challenges, and employment is clearly number one. Quality education, innovation, supporting business initiatives, decent work, and access to productive resources – all goals set out in the various SDGs – are the key pillars to achieving this. The digital revolution or robotisation generates risks and opportunities for youth employment. According to the ILO, more than 600 million new jobs need to be created from now to 2030, just to keep up with the pace at which the world population is growing. The good news is that the 2030 Agenda and the implementation of the Paris Agreement on climate will create millions of new jobs and open new fields in activities, such as sustainable agriculture, renewable energy, telecommunications…

-Have you already had a first meeting with the Novia Salcedo Foundation? What do you think about the Campaign to Proclaim a Youth Employment Decade?

-The visibility achieved on the international agenda regarding priority issues through such instruments as decades or years dedicated to them, have had an impact in the past and can also have an impact in the future. It is important to build a social and international consensus regarding these campaigns, bringing together public and private agents, and working on them with the assistance of the United Nations.

-Your latest destination as ambassador, Cuba, has been hit by hurricane Irma, a meteorological phenomenon that has also devastated Florida. Is this another wake-up call for all countries to take measures to combat climate change?

-Yes, without a doubt. Climate change does not cause hurricanes, but there is a scientific consensus that their frequency, and above all their intensity – and therefore their impact- are exacerbated by climate change. It is not just a wake-up call what we need. We must really pay attention, and right now. We are in time to keep climate change below 1.5 to 2 degrees Celsius, which is considered as a moderately safe and medium-low impact level. But, to achieve this, we must act now.

-Are you optimistic about the situation on the planet in 2030? Will we have achieved most of the goals set out?

-Of course. That is why I am very enthusiastic about the mission with which I have been entrusted.