When the doors to the labour market remain closed longer than they are open or when the training acquired is not enough to obtain a decent job, self-employment often becomes the only way out. This logic is even more pronounced in countries where a high percentage of the population lives in a situation of vulnerability.

BBVA created the Microfinance Foundation in 2007 with the aim of helping people with limited resources who need to set up a small business with which to move forward. This entity uses its own methodology, productive finance, which focuses on entrepreneurs and supports them so that their companies generate surpluses in a sustainable manner.

During these twelve years of activity, FMBBVA has supported more than five million vulnerable entrepreneurs in Latin America, creating development opportunities for them to improve their living conditions. “It is already one of the philanthropic initiatives with the greatest social impact and the leading operator with an individual methodology in the region,” the entity points out. 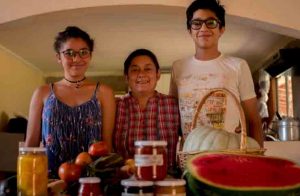 The soul of the Foundation

The 8,000 employees and 515 offices spread across the five countries are the key elements in this entire financial framework. “More than half of the 8,000 employees of the entire Foundation Group are credit advisors; they travel the distance it takes to visit the entrepreneurs and to get to know their businesses (which must have been in operation for some time). Sometimes they are very, very small businesses, in remote and isolated places, but that is the “magic” of the work the advisors perform, and that is why we usually say that they are the “soul” of the Foundation,” they say.

To make the process as efficient as possible, the entity uses “technology so that the advisors do not have to travel with folders and papers but with mobile devices, which make all the formalities faster and avoids the entrepreneur having to invest time and money to travel to a branch office. Based on all the information that is collected in the field, a credit committee decides whether it is feasible to grant a loan or not”.

This support process not only includes financial products such as credit but also offers savings accounts, microinsurance… Always adapted to the business and its needs. In addition, they are given financial education and training adapted to their sector. “The advisors are usually people from the same area or community as the entrepreneurs and this facilitates establishing a relationship of trust, which is key in microfinance arrangements”, they stress. In addition, the Foundation teaches them to save so they can cope with unforeseen events in the region with the lowest level of savings in the world, according to the Inter-American Development Bank.

Young women, on the front line

Entrepreneurial figures in Latin America have the name of women: Jessica, Rosalbina, Eladia… According to the Ibero-American Youth Organization, the percentage of young women who open a business as the only way to find a job doubles that of men. The disproportionate amount of time they spend on household chores and caring for children and the elderly, their low level of education and lack of capital and confidence in themselves are obstacles to their access to jobs. To this must be added the precarious employment situation of young women: 60% of female workers aged 15 to 24 earn less than the national minimum wage, which is around 280 dollars on average, according to CEPAL. For this reason, the BBVA Microfinance Foundation supports the entrepreneurship of young women, who represent nearly 20% of the 1.2 million women entrepreneurs it caters for in Colombia, Peru, the Dominican Republic, Chile and Panama.

According to the UN, 59% of the most vulnerable women in Latin America are mothers at the age of 19. “Setting up a business is a way of combining work and household responsibilities and for many, it is the only option to earn income,” summarizes the Foundation’s head of Women’s Empowerment, Laura Fernandez Lord.